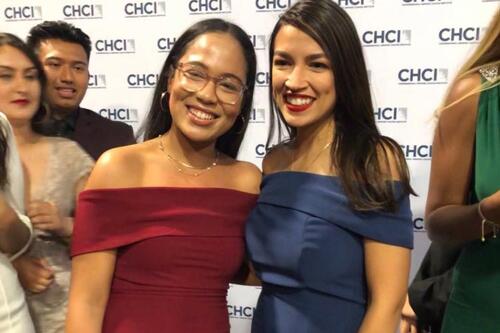 The Congressional Hispanic Caucus Institute (CHCI) is a nonprofit organization aimed at providing leadership development and valuable Capitol Hill experience to emerging Latino leaders from across the nation. As a member of CHCI’s Congressional Internship Program, I’ve been exposed to leadership opportunities aligned with my own professional and personal growth. I was placed in the office of Congressman José E. Serrano, one of the longest serving Latinos in Congress, representing the 15th District of New York. Thus far, my experience has been transformational in every sense of the word. I have had the opportunity to network with Latinx professionals in the legal advocacy field, engage in conversations with members of Congress, and explore my own interests. As a first-generation Latina student from the Bronx, New York, I am now more confident in my professional skills and ability to advocate for myself.

Upon arriving in Washington, DC, I underwent orientation—a week filled with informational workshops, workplace training, and team bonding. The 23 other students and I learned about the daunting reality of Capitol Hill and the importance of our selection as interns. We heard on numerous occasions that our placement on Capitol Hill meant we represented not only CHCI but our respective communities, universities, and other marginalized groups. Every day that I enter the doors of my congress member’s office, I’m reminded that people back home are advocating for me, and I must do the same through my efforts on Capitol Hill.

As an intern on Capitol Hill, I am primarily responsible for answering constituent phone calls, attending hearings and policy briefings, writing memorandums, responding to constituent letters, and attending to other responsibilities as they come up. Not only is the workplace environment fast-paced, it is also meant to expose me to a wide variety of work during a short time. So far, the most memorable experience I have had has been attending the Judiciary Committee’s impeachment hearing. The hearing lasted approximately three hours and featured arguments from both Republicans and Democrats as to how our current administration has or has not engaged in fraudulent practices while in office. Similarly, I attended a hearing on ICE detention centers in the United States and their inhumane treatment of immigrant detainees. These helped me realize the value of first-hand experiences, rather than the study of them. Although I have spent the last three years of my undergraduate career studying political science, and more specifically the workings of federal government, it did not compare to sitting through actual congressional meetings revolving specific public policy issues and legislation.

The Congressional Hispanic Caucus Institute has opened doors for me that I did not even know existed. Last month, at an annual gala organized by CHCI, I had the opportunity to meet with prominent Latino leaders, such as Rep. Alexandria Ocasio Cortez and presidential candidate Julian Castro; engage in meaningful conversations with local Latino advocacy organizations; and dance alongside congressional members to live music performed by Puerto Rican musician Tito Nieves. I also had the opportunity to attend a presidential forum and hear from presidential candidates Senator Corey Booker, South Bend Mayor Pete Buttigieg, and Senator Amy Klobuchar about their general policy stances and reasoning behind their decisions to run for president.

One of the best experiences I have had as a CHCI intern is meeting Rep. Alexandria Ocasio Cortez (AOC), the congresswoman representing my hometown district of the Bronx. She is both one of the youngest women elected to Congress and a Latina with a working-class background. Her story is an example of the importance of persistence, community engagement, and hard work. One of Ocasio Cortez’ most notable campaign ads features the statement, “Women like me aren’t supposed to run for office.” In the face of adversity, Ocasio Cortez chose to rise above her circumstances and run for congressional office. As a leader, she is using her political platform to advocate on behalf of Latino communities on issues such as gentrification, higher education access, and comprehensive immigration reform. Upon meeting her at the CHCI gala, I was reminded of my purpose in Washington, DC, and the goals I had set for myself as an incoming student at Geneseo.

Ultimately, the experiences I have been exposed to through CHCI have taught me that leadership spaces on Capitol Hill are open and accessible to individuals like myself, and it is time that we claim these spaces.