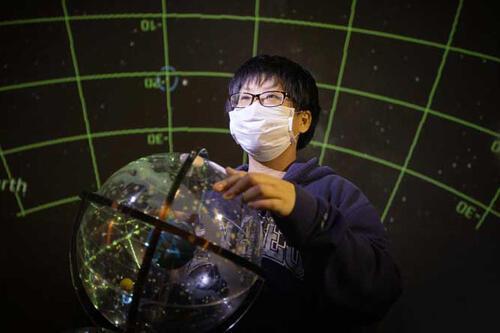 Imagine two massive black holes in space, swirling toward each other and then colliding in a powerful astrophysical smash-up. What happens next?

Gravitational waves happen. They appear like the ripples on a pond as something moves across its surface—only these ripples are distortions in the fabric of spacetime. Astrophysicists around the world are fascinated by them, and physics students at SUNY Geneseo are building theoretical models to help predict and interpret their behavior.

“Space is a big laboratory,” says Thomas Osburn, assistant professor in the Department of Physics and Astronomy and leader of the Geneseo group researching gravitational waves. “For centuries, scientists have pointed their telescopes at the sky and observed light from beyond our world. But some mysteries are undetectable by that visible spectrum, so we apply gravitational physics to identify new messengers that reveal what would otherwise be invisible.”

Gravitational waves, he says, carry an entirely new spectrum. Predicted by Einstein but not detected until 2015, they’re a new tool in the toolkit used to explore the universe. Gravitational waves open portals to expanding humankind’s knowledge and discovering previously unseen parts of the universe—such as black holes, the Big Bang, and other exotic possibilities.

“We’re studying a system of two black holes spiraling into each other and generating gravitational waves we can detect,” says Charlie Derbyshire ’23, a physics major from Rhinebeck, NY. “We need models of gravitational waves in order to detect them, and to create the models, we need to solve the equations for general relativity around these black holes.” Theoretical modeling in physics requires a lot of math, and Einstein’s equations require a lot of approximation schemes. “But once we solve this,” says Derbyshire, “we’ll have more accurate models of gravitational waves and can detect them more easily.”

Physics major Nami Nishimura ’21, from Ikoma City in Japan, is responsible for developing the code to solve the differential equations numerically and simulate gravitational waves, all using the programming tool Mathematica. “The most difficult and yet interesting part is to develop theoretical strategies by myself and actually build the code in order to come up with the way to reveal the mysteries,” she says.

Osburn says his team’s models are designed for use in the upcoming Laser Interferometer Space Antenna (LISA) mission, a collaboration by the European Space Agency, NASA, and an international consortium of scientists. Scheduled to launch in the early 2030s, LISA is a space-based observatory designed to catch gravitational waves from orbiting black holes hundreds of millions of times more massive than our sun. By operating off-planet and avoiding interfering noise, LISA will reach regions of the spectrum inaccessible from Earth.

“Gravitational waves are in the forefront of physics—it’s exciting to be part of an ever-expanding field,” says Derbyshire. “Being a freshman in college and getting thrown into something new can be scary. But on the other hand, this is work no one has ever done before, and that is so cool.”

Both Nishimura and Derbyshire credit their research experiences with helping them to define their majors and refine their career goals. This summer, Nishimura will conduct research in astrophysics at the Space Telescope Science Institute, the science operation center for the Hubble Space Telescope, with an eye on an eventual doctorate in physics.

“I like how challenging physics can be and how we can apply our models and simulations to understand the universe,” says Nishimura.

For more, check out this Q&A with Nishimura about her research.