For the Build-it, Leave-it, Teach-it (BLT) project, SUNY Geneseo faculty and physics majors build physics demonstration equipment and discuss the best ways to present the demonstration in a classroom. Physics teacher candidates then bring the piece of equipment to a local high school physics classroom and use it to teach a physical concept to the students. The BLT unit is then left as a donation to that classroom.

In the Fall of 2011, we built "The Race. "In this demonstration, two identical steel balls are released from the same height on two vee-channel tracks. They accelerate down identical slopes. Then one ball goes uphill and downhill while the other ball goes downhill then uphill. Which ball will reach the end of the track first? 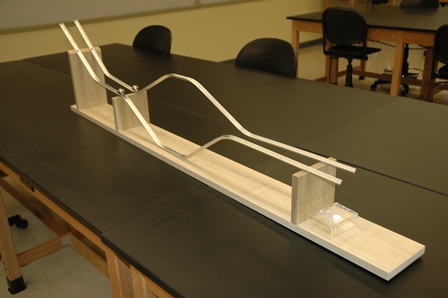 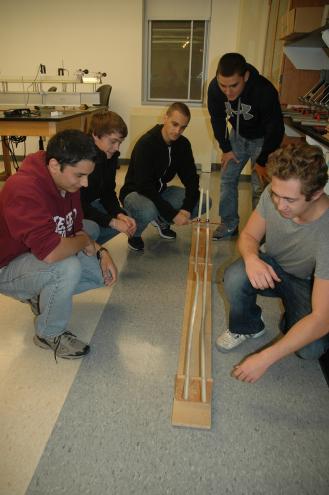 In the Spring of 2012, we presented a "Lenz's Law" demonstration. In this demonstration, a cylindrical magnet is dropped down a vertical copper pipe and a vertical plastic pipe of identical lengths. The time of travel is much longer because of the Lenz's Law effect.  (Presenters - Michael and Jon)

In the Fall of 2012 we presented the "Falling Slinky" demonstration, in which a slinky is dangled from the top and students are asked to predict who it will fall. In this case a response worksheet and a video were developed to help with the presentation, and data where collected to investigate how the requirement for a written prediction affected students' understanding.

In the Spring of 2013 we presented the "Faraday's Jump Rope" demonstration. 25-foot length of six-conductor wire was configured into a loop with six turns. The two ends of the loop were attached to a micro-amp galvanometer.

The Poisson Dot BLT was presented in Spring 2014. This demonstration is based on a historical event that illustrated the wave nature of light. A green laser pointer (www.newegg.com $13.95 for tw0) was mounted so that the momentary contact switch was pressed on by a clothespin, which also mounted held the laser pointer in place. A lens (http://www.mscdirect.com, #56451081 $10.35 each) was mounted into a rubber stopper with a #7 hole, mounted on the front of the laser pointer to expand the beam. A standard BB ball bearing was glued to a microscope slide and also held with a clothespin on a table a distance away, where the diameter of the laser beam was slightly larger than that of the BB. The poisson dot pattern appears on a distant wall. For fun, we had the students read a SCRIPT describing this phenomenon. 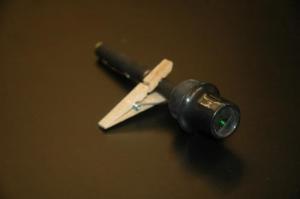 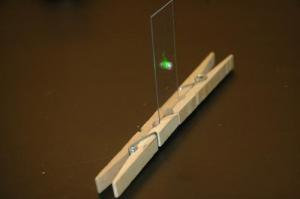 BLT - The Hinged Board

The Fall 2015 BLT is the Hinged Board. A metal sphere sits on a golf tee on a board at a 30 degree angle. When the board is released, it rotates about one end, and the viewer is supposed to predict which cup the ball will land in. (Presenters - Jon and Sam)

The Spring 2016 BLT is the Air Lens. Florence flask is inside a clear plastic box. Water is placed in the flask and a laser is used to show that parallel rays of light converge. When water is placed in the box and the flask is filled with air, parallel rays of light diverge. This enhances understanding of Snell's Law.  (Presenters - Michael and Sam)

The Spring 2017 BLT is Rolling Uphill. Two Styrofoam circles have been glued together with an aluminum weight trapped inside them to shift the center of mass.  When properly released, this wheel will roll uphill.  (Before showing the demo, we asked students to predict how many blocks should be placed beneath the ramp to cause the wheel to roll.)  A second setup shows that a cylinder rolls down and ramp while a doublt cone rolls up the ramp.  In all cases the center of mass of the objects is moving from a high position to a low position.(Presenters - Michael and Jon) 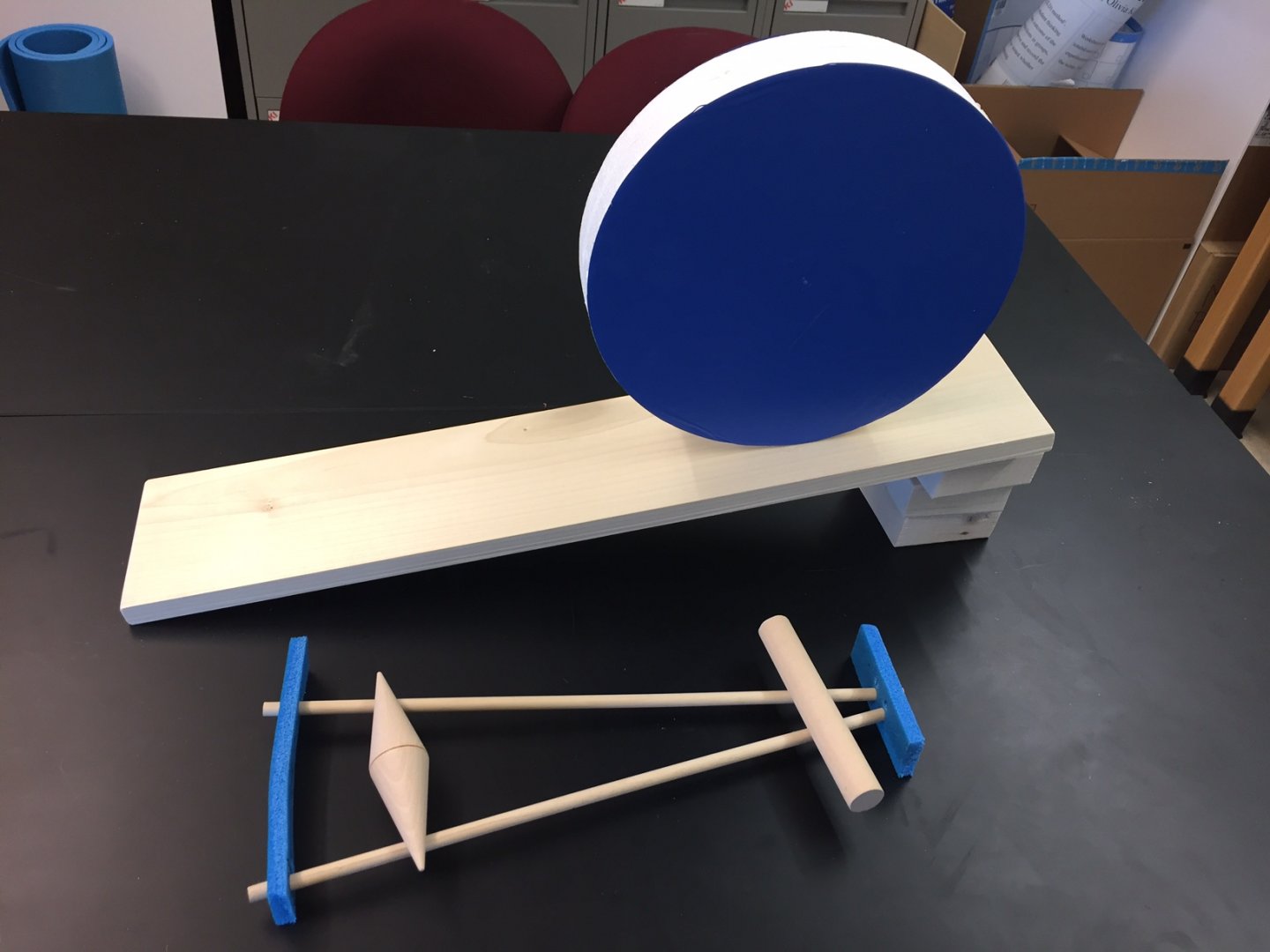 The Fall 2017 BLT is Drop and Launch. Two wooden balls are set up on a spring-loaded rod so that one drops straight down at the same instant that the other is launched in a horizontal direction.  Will the dropped ball hit the ground first?  The launched ball?  Will they tie? 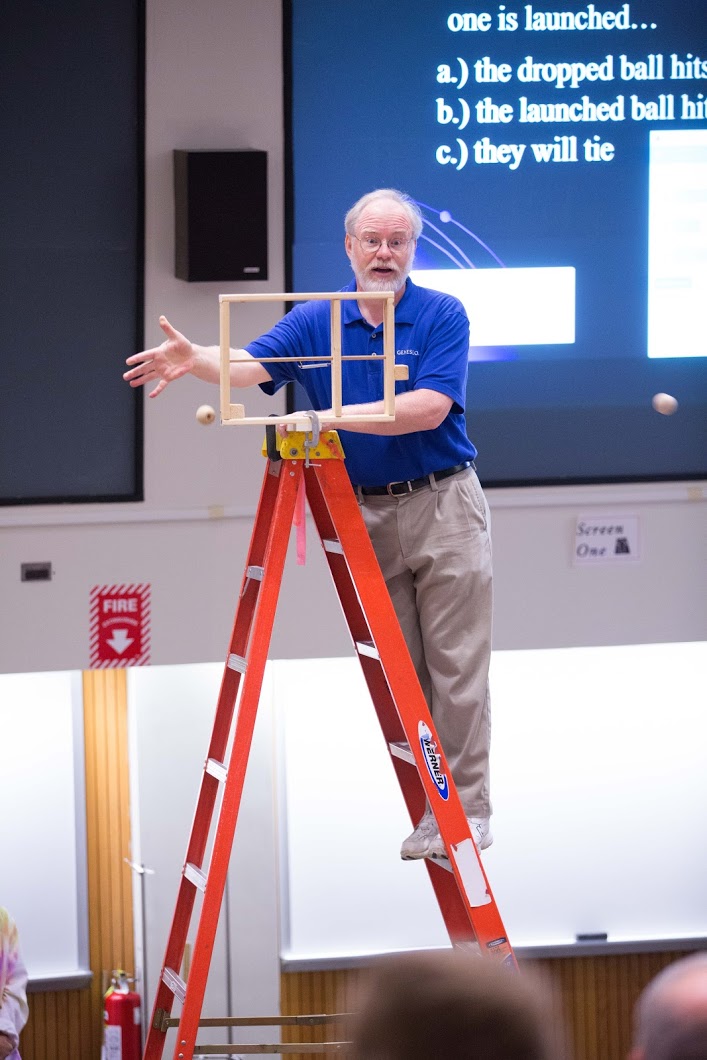 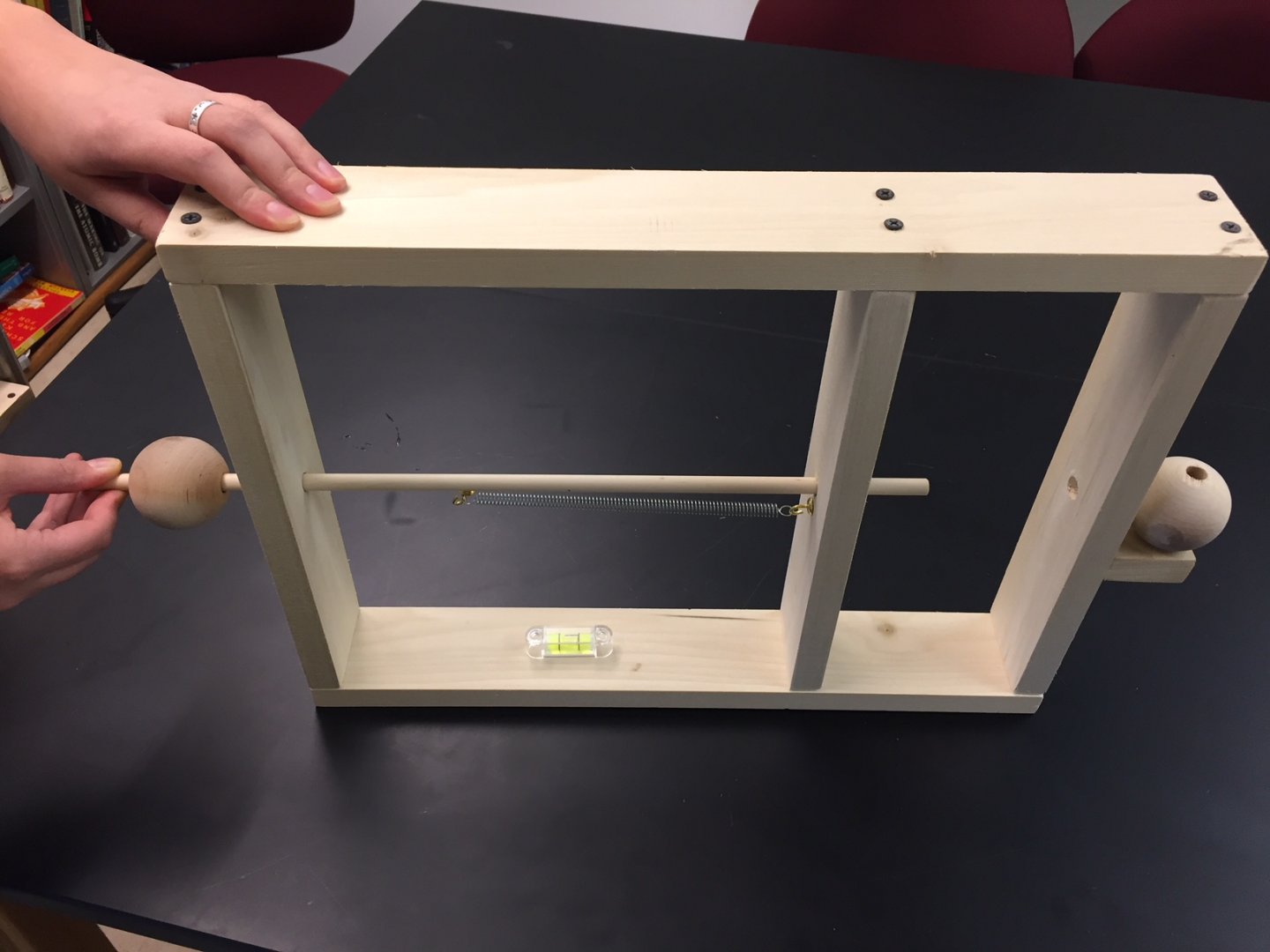 The Spring 2018 BLT is the Resonance Tube.  A hole was drilled near the base of a 40-cm long plastic graduated cylinder to allow a one-hole rubber stopper to be installed.  A metal tube in the stopper was attached to rubber tubing with a pinch clamp.  The presenter fills the tube with water (with the clamp closed!) and sets a speaker on top of the tube (sitting on a metal grid).  Using a cellular phone app, a tone of a single frequency (~800 Hz) was played as the water was slowly allowed to drain through the rubber tube.  When the column of air is an odd-inter number of quarter-wavelengths, resonances are clearly heard.  The sound becomes noticeably louder because of the constructive interference of the incident sound waves and the sound waves reflected from the surface of the water.  (Presenters - Jon and Michael) 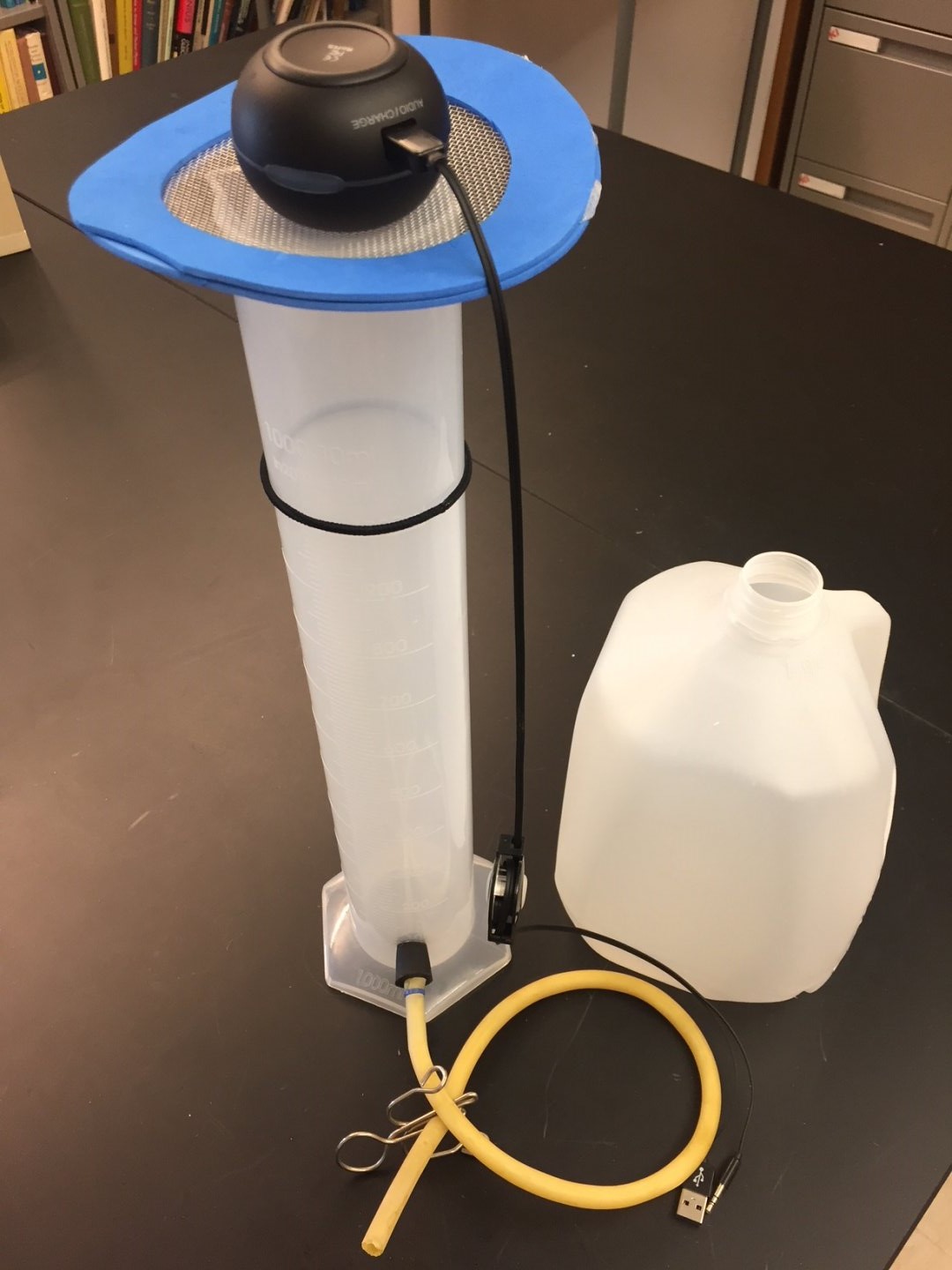 The Spring 2019 BLT is the Car on a Boat.  In this demonstration of center-of-mass and Newton's Second Law for a system of particles, a radio-controlled car is placed on the back of a styrofoam "boat" that floats in a plastic window box.  When the car moves forward, the boat must move backward so that the center of mass of the system does not change.  (Presenters - Sam and Jon)

During the Fall of 2019 and Spring of 2020, we worked on two demos which we brought into physics classrooms during the spring.  The Mousetrap Launch Cart demonstrates the independence of horizontal and vertical motion.  A mousetrap is used to launch a ping-pong ball vertically upwards.  When the cart is given some horizontal velocity, and the mousetrap is triggered using a string with a magnetic coupling, the ball traces out a parabolic path and lands near the moving cart.  (Presenter - )

During the Fall of 2020 we provided virtual demos to high school classrooms.  The wave machine demonstrates many of the components of transverse wave motion.  (Presenters - Nicole and Jack)

During the Spring of 2021 we provided virtual demos to high school classrooms.  This demo shows the spectra for three different light sources, produced using a commercially available diffraction grating.  A standard incandescent bulb (we used a Sylvania 60 W bulb) produces a continuous spectrum.  A compact fluorescent bulb (we used a 13W Xtricity bulb) produced an emission (or "bright line") spectrum.  The third bulb (GE 40 W Reveal ) is an incandescent filament with a glass bulb that has been coated with neodymium oxide, Nd2O3 to absorb some of wavelengths.  This produces an absorption (or "dark line") spectrum.  This work was inspired by

Note:  This demo works best if you plug it into a variac and adjust the brightness for each bulb to improve the appearance of the spectra.  (Presenter - Nicole)

BLT - The Penguin and the Snowball

During the 2021-22 academic year, we worked on developing a kinematic demo based on the old "Monkey and Hunter" problem found in classic physics texts.  An rubber-band powered Nerf pellet launcher was used to shoot a projectile at a small toy penguin.  Using a momentary contact switch, the penguin suspected by an electromagnet was released at the same time as the projectile was fired.  See also the derivation.  (Presenters - Maggie and Nicole)