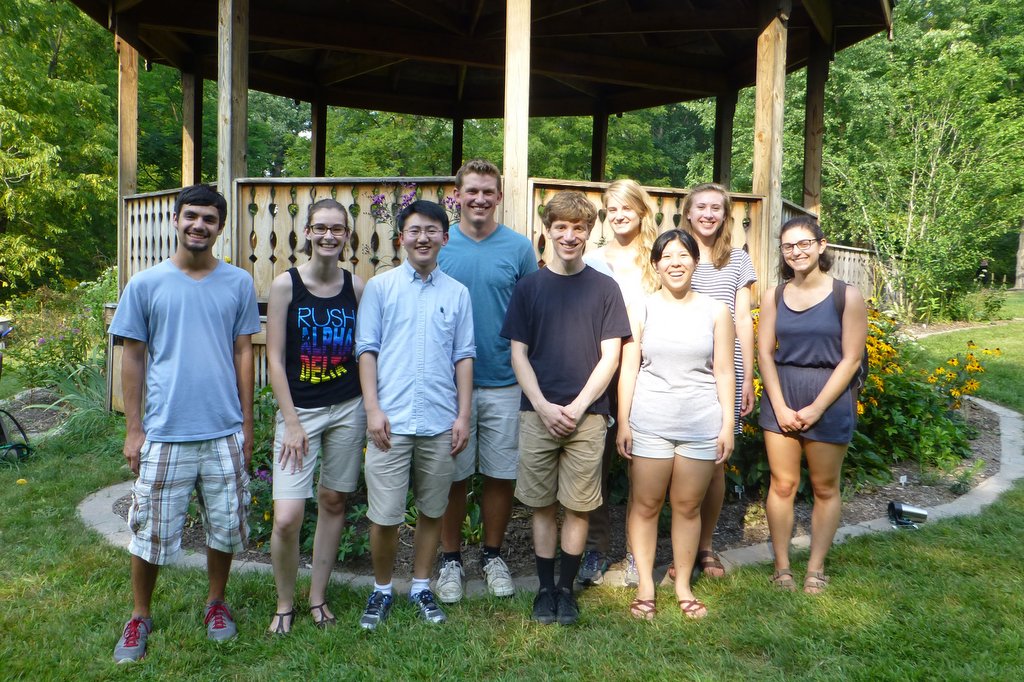 Decomposition of leaf litter of native and invasive shrubs

The purpose of this project is to investigate the impacts of invasive species on native ecosystems, specifically using the rates of decomposition of leaf litter. The species used in this experiment will include the native dogwood, the nitrogen-fixing invasive autumn olive, and the non-nitrogen-fixing invasive Asian honeysuckle. All of the decomposition measurements will be made in the Roemer Arboretum. Litter collection and weighing is currently taking place. Litter bags will then be filled with crushed litter and placed under each respective shrub in Spring 2016. Afterwards, the litter will be collected at set time intervals and analyzed for nitrogen and carbon concentration. These measurements will be used to assess the rate of decomposition for each species and to compare their effects on nutrient cycling.

In this study, I used fluorescent-painted bowls (white, yellow, blue) filled with soapy water to collect bees from four study sites: the College Green, a shaded and a sunny site in the Arboretum, and a site by an unmowed meadow. The contents of the bowls were collected, and the bees are being pinned and identified. The abundance of bees may vary at the different sites due to food availability or habitat quality; other factors such as weather and time of year may also affect capture rates. The site comparison aspect of this study can be used to inform improvements in habitat quality for local bees.

Formica glacialis, a common ant species in Geneseo’s Roemer Arboretum, may experience periodic disruption of its colonies from raids by slave-making ants aimed at capturing its brood. Consequently, colonies may stay and endure repeated exploitation and possible colony death, or relocate to a new nest; eventually, vacant nests may become occupied by a different colony. Using microsatellite DNA markers, I am comparing genotypes of workers sampled 5-6 years ago to colonies in the same active nest location from summer 2015. My objective is to detect changes in the genetic composition or colony structure that would indicate the identity of the colony in a particular location has changed.

• Mapping the distribution of M. uniflora by conducting counts of stalks in clusters as a density measure and gathering fine-scale x-y coordinate map data
• Gathering GPS and diameter data for the nearby trees
• Analysis of its spatial distribution to determine the most likely individual tree associates
• Collecting and preparing root ball samples for future extraction of fungal DNA to identify fungal associates

Ants interact with their ecosystem in many ways from soil excavation and redistribution to seed dispersal and as key players in the food webs as scavengers and predators. The ant species of Formica glacialis is abundantly found throughout Roemer Arboretum where they create long-lasting mounds through underground soil excavation. My goal is to further investigate the effects of these ants on soil properties and local flora by comparing recently abandoned nests to  the surrounding forest floor. In particular, I am measuring pant species richness and diversity, soil decomposition rates using a filter paper assay, soil pH, and soil organic matter content.

Wolbachia are a group of maternally inherited intracellular bacteria. While commonly transmitted vertically (mother to offspring), research has suggested that Wolbachia may be transferred horizontally as well. Close interactions between slave-making ants and their slaves may provide an opportunity for horizontal transmission of Wolbachia between species, as the slave-maker and its host species live together. In this project, I am testing for the presence of Wolbachia in Formica free-living, slave-maker and slave ants. If found, I will compare Wolbachia strains found in slave-makers and their enslaved nestmates to test for the possibility of horizontal transmission

Herbivore damage on native vs. invasive shrubs in Roemer Arboretum

Understory shrubs provide food for herbivorous insects, which are prey for birds, mammals and other higher trophic level species. A potential factor in the success of invasive species in their invaded habitat is that they have escaped their own specialized herbivores. The purpose of my research is to compare leaf insect damage on invasive species (Amur honeysuckle and autumn olive) to native species (dogwood) in Geneseo’s own Roemer Arboretum. Leaf samples were marked, photographed, and digitized to quantify total herbivore damage for the three species. It is hypothesized that the native species’ leaves will be the most damaged since native herbivores are accustomed to feeding on them, whereas the nonnatives are less likely to be fed on by native herbivores.

Utilization of fruits from native vs. invasive shrubs by birds in Roemer Arboretum

•To quantify the removal rates of fruits from the invasive vs. native shrubs