Bandwidth refers to the amount of information that can pass through the network. More information passing through the network, means more bandwidth used, which in turn means higher cost (think of it as another utility.) Most people on the network use very little bandwidth as they browse the web, send email and download files. However, in the past the majority of the bandwidth was being consumed by a small number of users, causing poor network performance for everyone.

How much bandwidth does ResNet have? 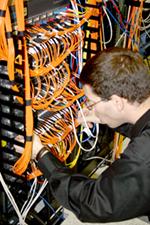 How is our bandwidth managed?

CIT uses a bandwidth management appliance manufactured by Exinda to monitor all network traffic to and from the Geneseo network. Network traffic is identified and prioritized to provide a fair and equitable amount of bandwidth to all. This means the user that wants to download music or movies will be limited so that network performance for all others is not degraded. This also includes bandwidth available by users outside of Geneseo that try to upload peer-to-peer files from computers on campus. We found that over 50% of the network traffic leaving ResNet headed out the Internet was from one single file sharing application. By limiting this type of traffic we can increase the performance of the network for everyone. Peer-to-peer applications are classified as entertainment traffic which is given a lower priority than web browsing and email.

How does the Exinda control bandwidth?

We have identified and prioritized four different types of traffic that move across our network.

The system does not control traffic going between two on-campus computers, web sites or servers.

All standard traffic bound for or to the Internet (excluding peer-to-peer), is given a "normal" priority. If the bandwidth is available, then there is no artificial limit. Nearly all traffic fits into this category.

This kind of traffic is given very low priority, and is limited to 500 Kbps, if the bandwidth is available. This means extremely slow downloads and connections with off campus peers. P2P is an incredible consumer of bandwidth, and no matter how much we set aside, it would never be enough.

Various "worms" and other malicious applications have infected many computers on ResNet over the years. We are continually modifying the system to recognize several variants of malicious software, in the hopes of blocking most of them.

Does this mean that CIT monitors the web sites I visit and reads my email?

Absolutely not! CIT's primary concern is network performance, not the content of your traffic.

More information on bandwidth can be found on the following web sites: