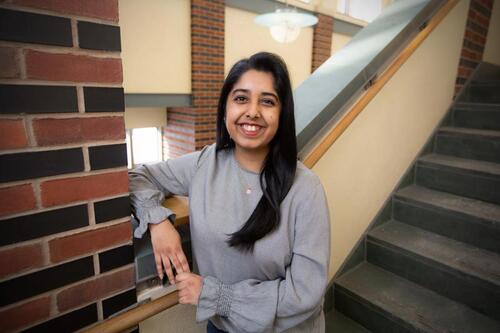 Like many first-generation Americans, Neha Marolia ’19 — an Indian American from Syosset, NY — began her schooling without a working knowledge of English. This May, she’ll graduate with a degree in English education and a passion for bringing language and literature to others.

Marolia’s parents were both born and raised in India, immigrating to the U.S. in the ‘90s. “Growing up, every question I asked them — why are we living here, why don’t we live closer to the city — all the answers came back to education and school district,” she said. “That’s the core of me growing up.”

At home, the family spoke Gujarati, a language native to Gujarat in western India. “My brother and I went through the ESL [English as a Second Language] program in school, and when you’re young, you can learn a second language so quickly — you’re like sponges,” Marolia said. “By second or third grade we were both fluent.” Learning a new language meant she had one culture at school and another culture at home, and for a while, Marolia struggled with that. “But as I grew older, I grew more confident. I started to speak in English with my parents, and I started to think in English, and then I strengthened it so much that English became my superpower.”

Finding a supportive and inclusive college mattered to Marolia, who chose Geneseo because “it made me want to surround myself with students and faculty who are so inspiring through their work and work ethics.” Matriculating as an undeclared student, she began to explore, joining clubs and deliberately seeking out people with different perspectives from herself. “I feel like I always have FOMO [fear of missing out],” she laughed. She joined Orchesis Dance Club, twice served as an Orientation Leader for incoming freshmen, and spent her sophomore year as the student coordinator for Geneseo Late Knight, a campus group that provides late-night entertainment. The College’s open and welcoming attitude to other people’s backgrounds and interests made Geneseo a perfect fit. “Everyone is just so kind, so hardworking, so passionate. No one ever gets attacked for being so academically driven,” she said. “No one judges each other for what they like or what they’re involved in; everyone does their own thing but respects each other at the same time.”

After settling on English education as a major (“my love for English was always there”), Marolia began to focus her extracurricular activities in that direction. Plus, she admitted, “time management is a huge thing — you have to figure out what you want to spend your time on.” As an upperclassman, she participated in a variety of tutoring opportunities in English speaking and writing: the Rochester Youth Scholars Academy; the Writing Learning Center; the Access Opportunity Programs; Project Together for Spanish-speaking families; and the Speech Buddy program for English-learning students, which resulted in a GREAT Day presentation on linguistics.

One-on-one tutoring can differ vastly from teaching an entire classroom, but Marolia’s student teaching experience last fall energized her. “I can’t even describe how meaningful student teaching was — I learned and grew so much. Everyone was so encouraging and so helpful,” she said. She especially appreciated the practical classroom application of techniques learned during her coursework. “Everything — the lesson planning, modifications, accommodations, my special education class, the vocabulary — I could apply it with my cooperating teachers and my administrators as well as my students.” Acknowledging that she’s still learning a lot, Marolia affirmed that “education is my passion, and I know I don’t want to give up on it.”

Ultimately, Marolia sees classroom teaching as a valuable stepping stone to a doctorate in educational administration. “I want to make an impact on education. I’m looking forward to teaching English, and I’ll be subbing on Long Island after graduation. But,” she concluded, “there’s so much more I want to accomplish.”