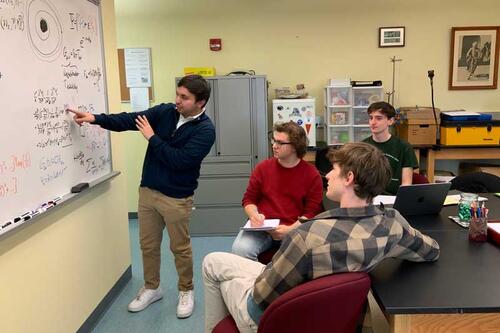 Four undergraduate physics students will deliver presentations at the American Physical Society’s in-person annual meeting this April. Their work is based on research by Professor Savi Iyer and Assistant Professor Thomas Osburn from the Department of Physics and Astronomy. Osburn will also present his research.

“The physics department has a long track record of taking students to the national APS conferences,” says Iyer. “We want them to gain that experience.”

Luis Yanez Zamora ’22, a physics and mathematics double major from East Hampton, NY, will deliver an oral presentation based on work by Osburn’s group, whose research models the motion of astronomical bodies around supermassive black holes and the gravitational waves that motion generates.

“My presentation will show how to build the tools for generating new theoretical models for interpreting gravitational wave observations,” says Yanez, whose post-graduate plans include a doctorate in theoretical astrophysics. “This template specifically deals with low-frequency gravitational waves, which are the main interest of NASA’s and the European Space Agency’s upcoming Laser Interferometer Space Antenna mission.”

Robert Sinesi ’23, a physics and applied mathematics double major from Liverpool, NY, has worked with Iyer since June 2020. His poster presentation will address the way light bends around spinning black holes. “The deflection of light can be analyzed to get a better idea of where the source actually is in space,” he says.

The students all agree that presenting at APS is a good opportunity to become familiar with the general scientific community, make connections for graduate school, and exercise their public speaking skills. “I’ll be able to discuss this niche area of physics with experts in this field and discover other areas of gravitational physics that I haven’t even heard of,” says Derbyshire.

The complex mathematical problems that come with studying the physics of gravitational waves and black holes mean those topics are more often taught at the graduate level, says Iyer. “But based on the high level of interest from our students, we now break our big projects into smaller chunks, and we’re able to get students started with hands-on research earlier.”

All four students have worked as paid researchers under the supervision of Osburn and Iyer, with their research funded in part by NASA through the New York Space Consortium. Yanez’s work is also funded by the McNair Scholars Program, which encourages the pursuit of doctoral studies.