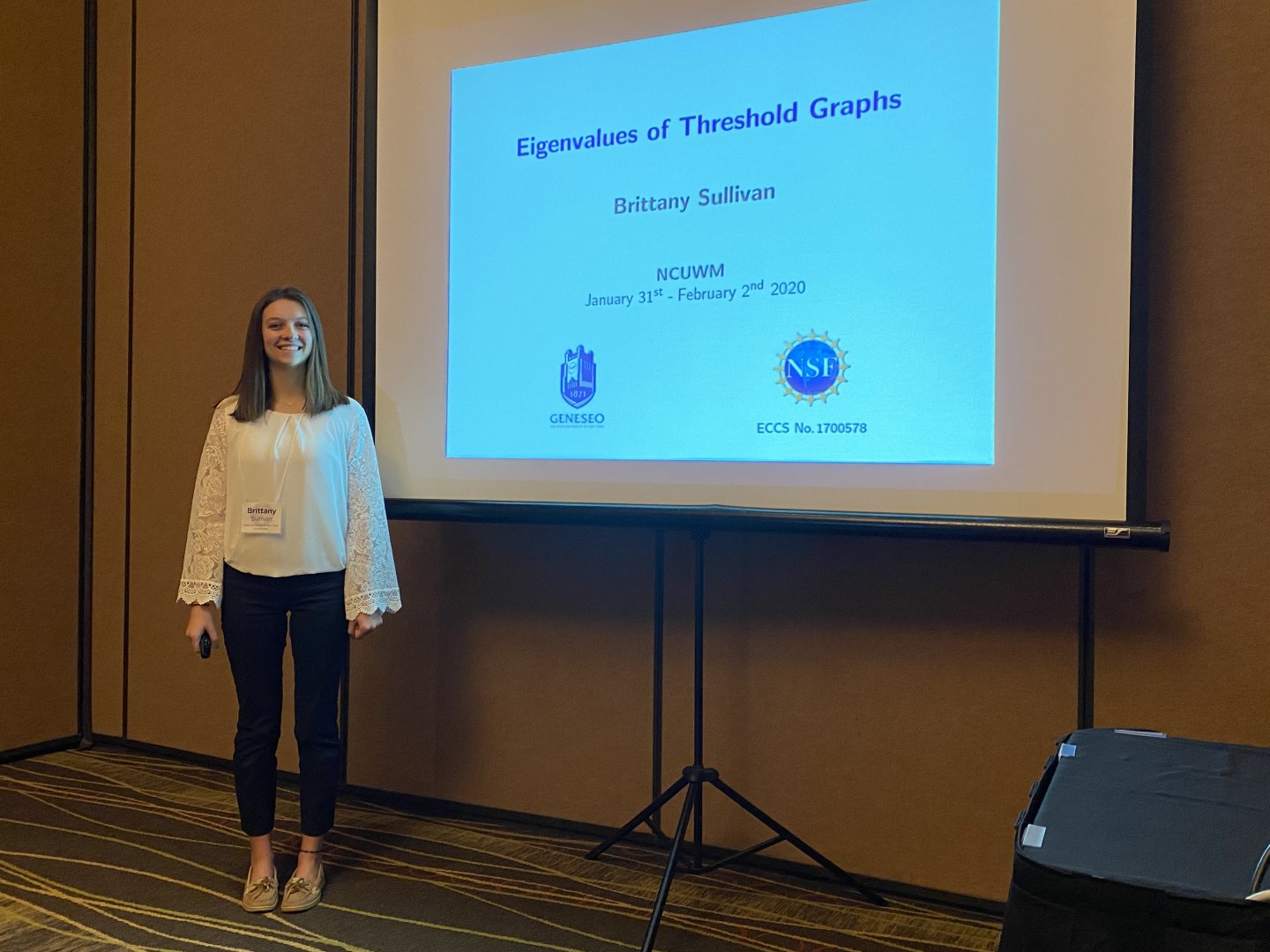 Brittany Sullivan attended the 22nd Nebraska Conference for Undergraduate Women in Mathematics and presented her research results on The Role of Eigenvalues of Threshold Graphs to Study Graph Invariants obtained over the 2019 summer with colleagues Natalie Schurman, Matt Ficarra and Professor Cesar Aguilar. 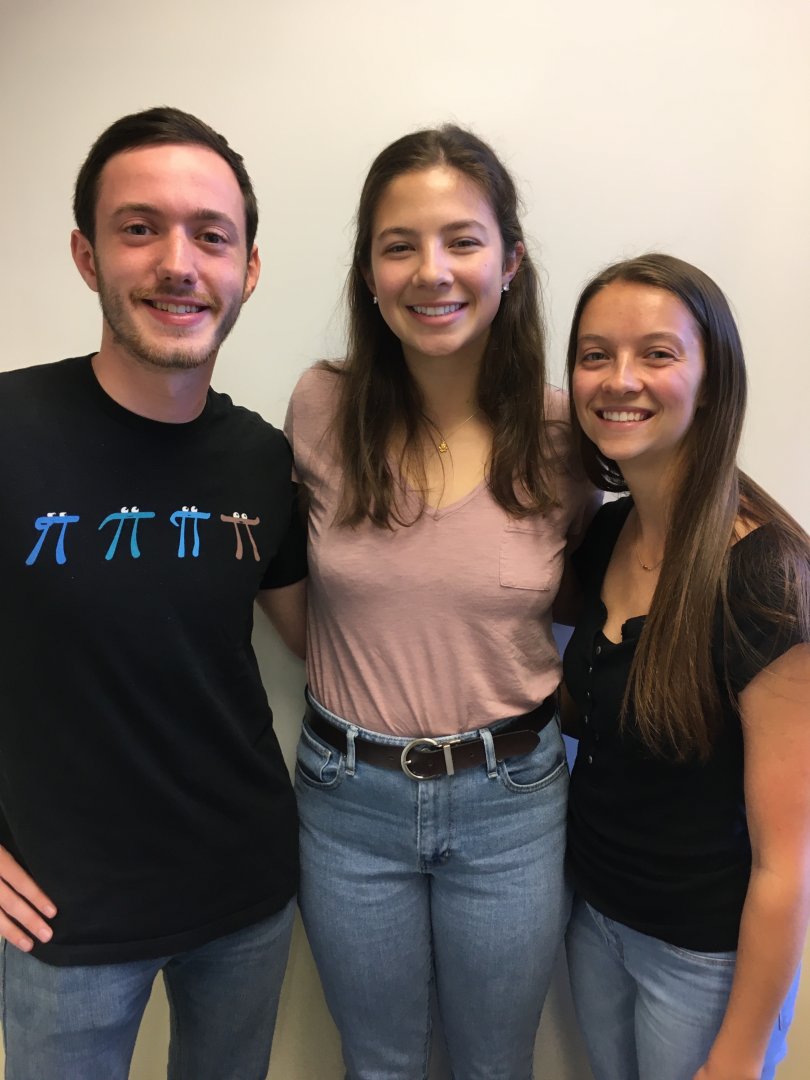 Matthew Ficarra (2021), Natalie Schurman (2020), and Brittany Sullivan (2020) co-author the paper The role of the anti-regular graph in the spectral analysis of threshold graphs with Professor Cesar Aguilar; the paper was published in the journal Linear Algebra and Its Applications and contains the results of their research performed over the 2019 summer session. 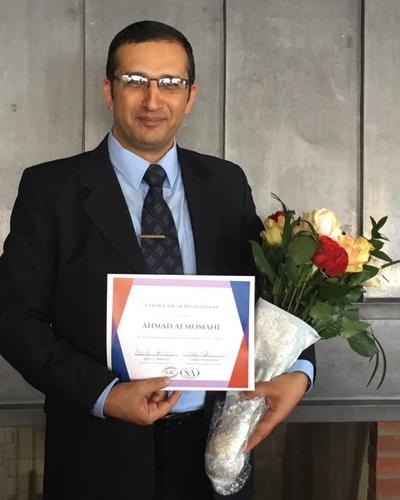 Out of over 120 nominations, Dr. Ahmad Almomani received a 2019 Professor Recognition Award. "Your students appreciate you and all that you do for them; that's why they decided to submit a nomination due to your teaching technique, accessibility, and the connections you have created with your students."  Congrats Professor Almomani!

Dr. Ahmad Almomani has won the MAA Seaway Logo competition. Professor Almomani's logo was chosen out of seven entries. Professor Almomani explains that the boat represents the MAA, and the sea represents all science. In our sailing expedition as mathematicians for seeking the unknown, we always end up leaving a beautiful impression like Euler's equation. 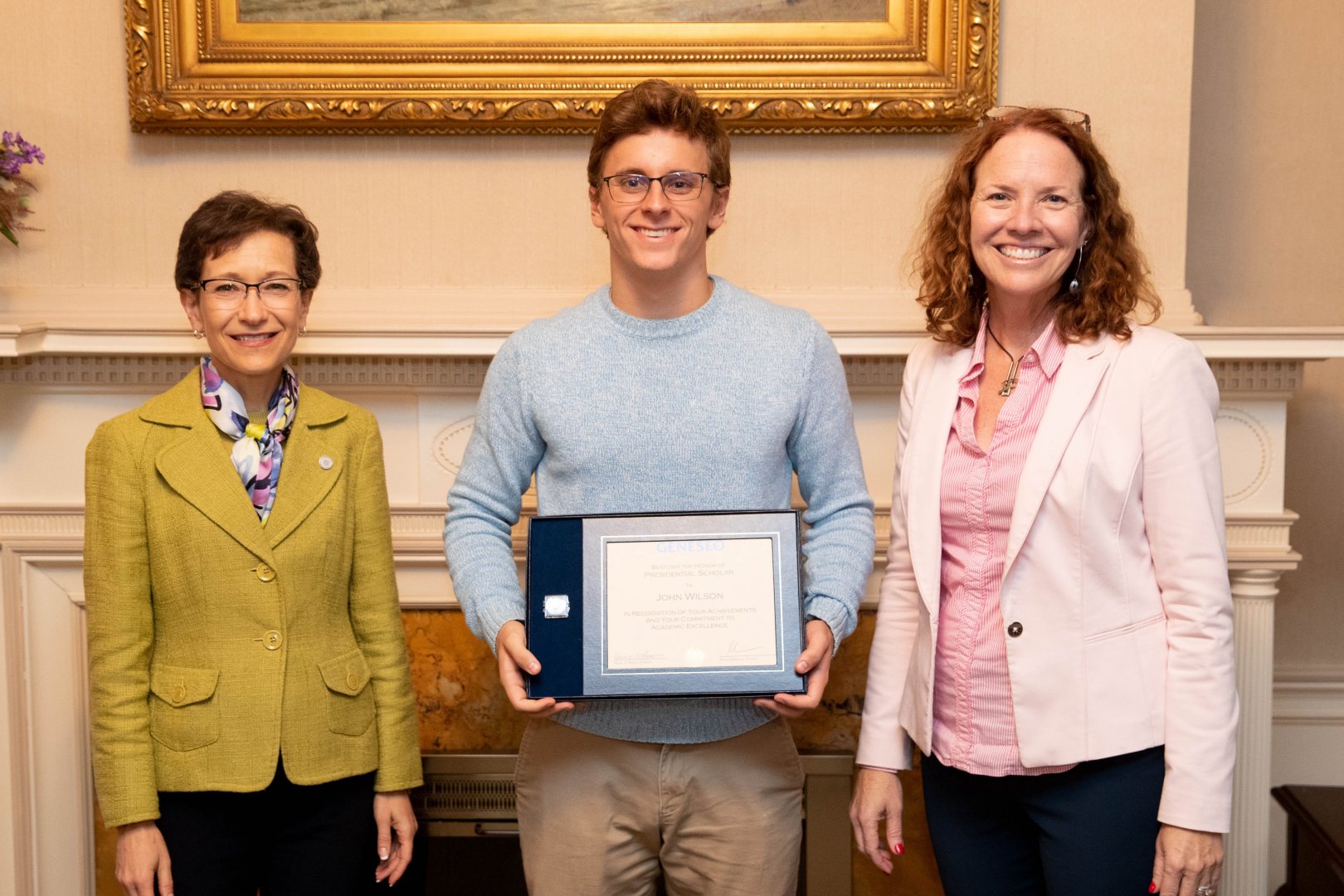 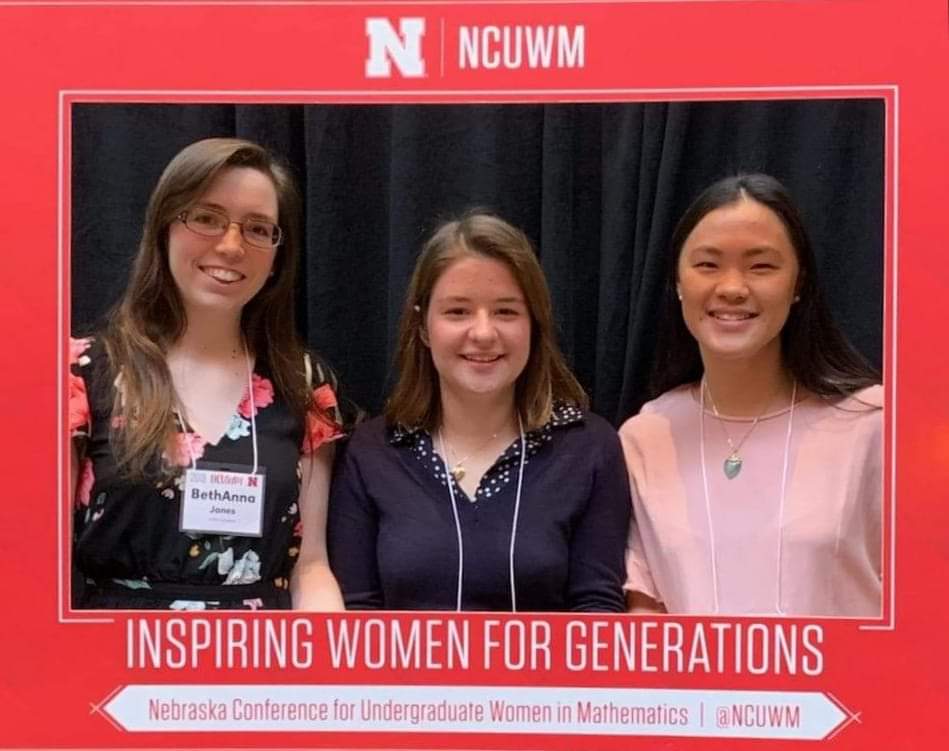 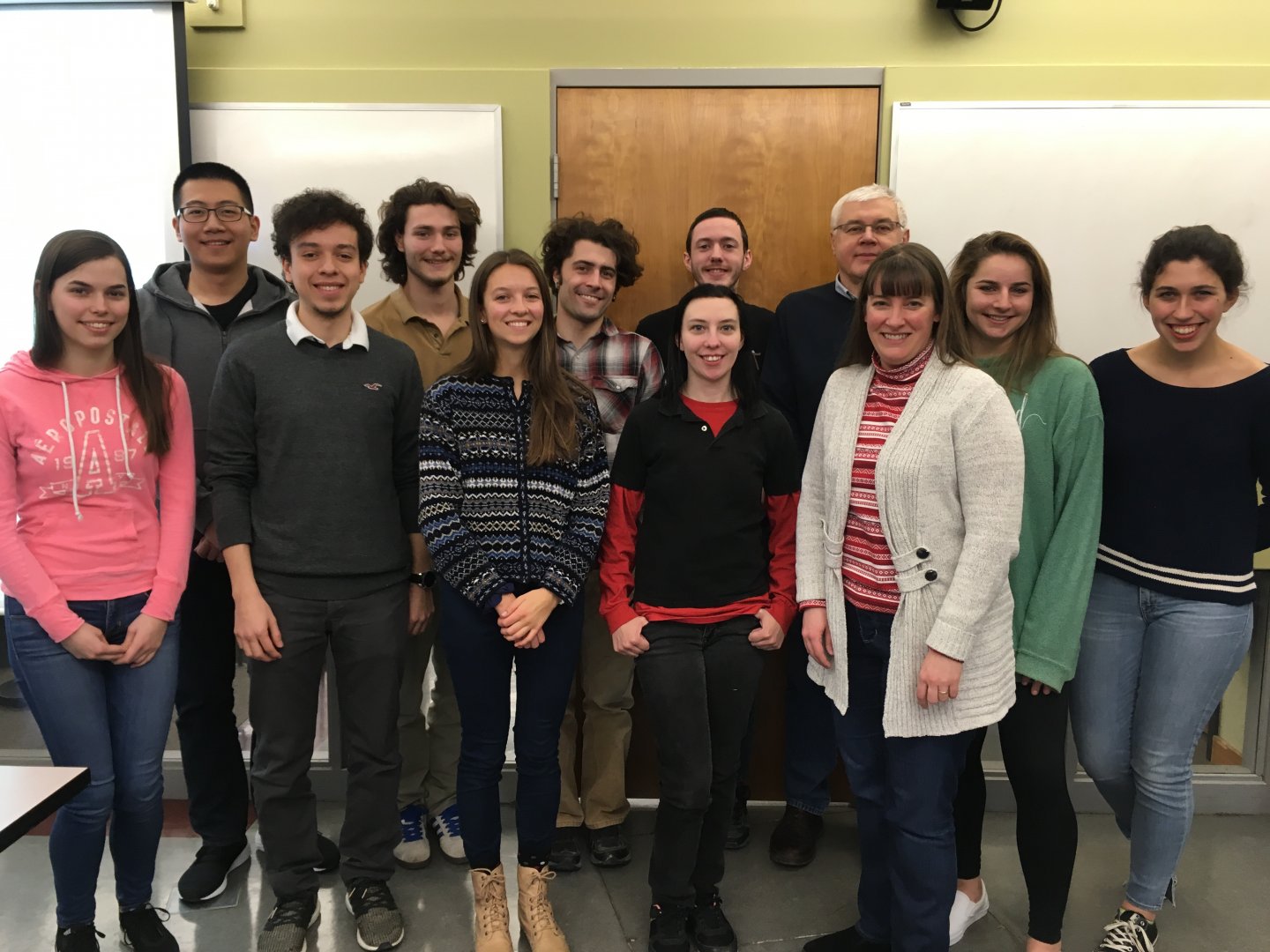 The annual Geneseo Math Research Weekend was held Feb 1 - 2, 2019, and was led by Dr. Elizabeth Cherry from RIT. This year's topic was on the Nonlinear Dynamics of the Heart.  Congrats to all students who participated!  See more pics here. 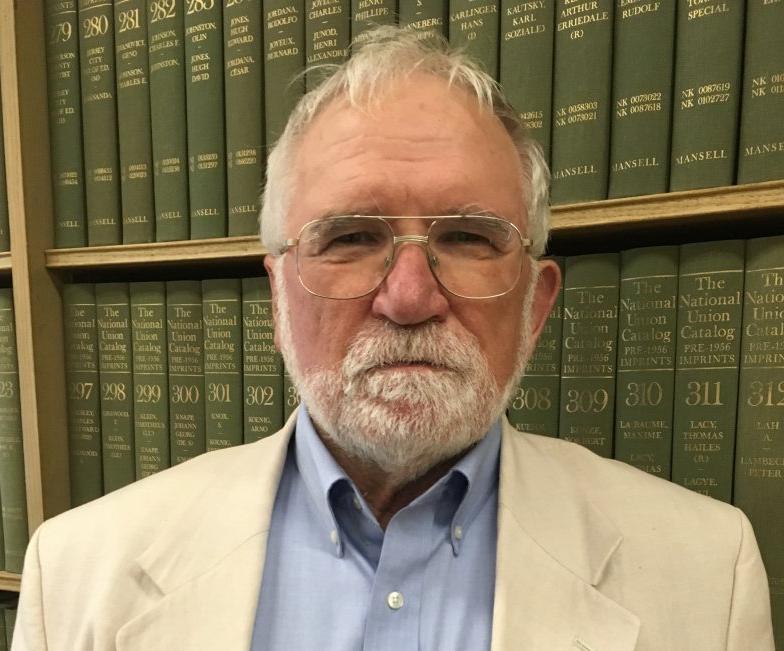 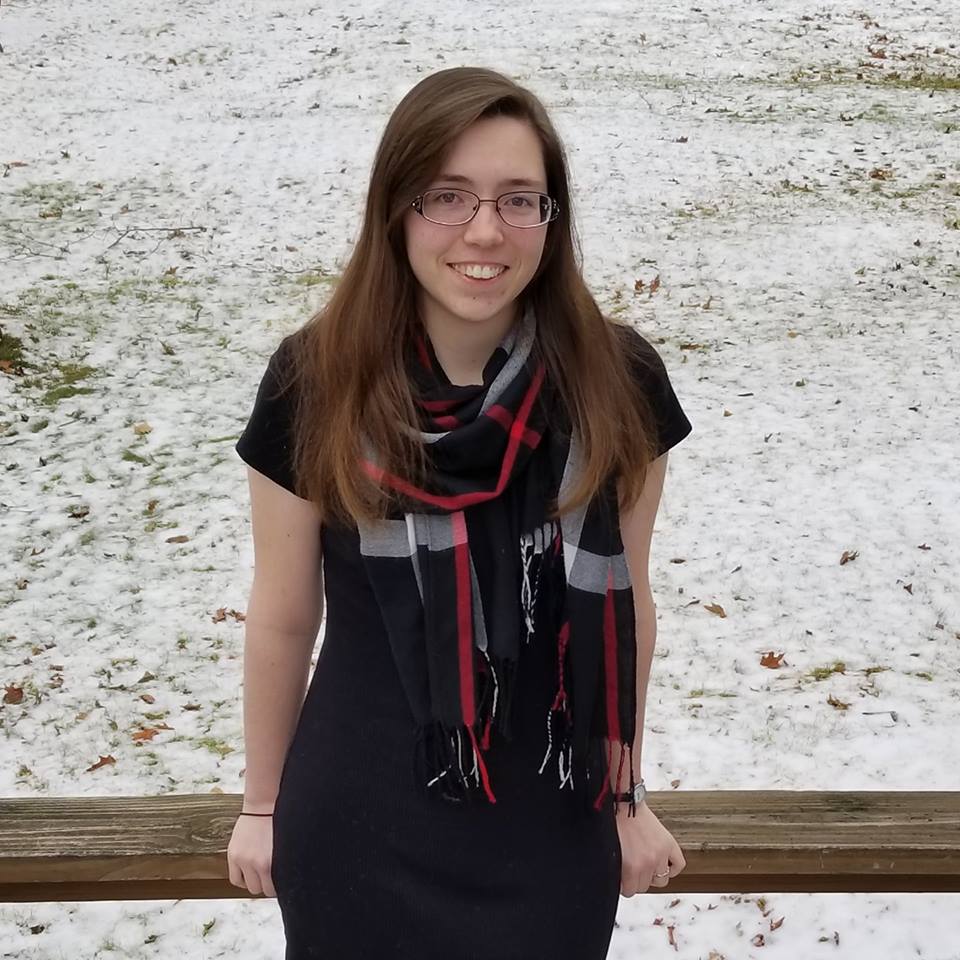 BethAnna Jones (MATH 2019) is a recipient of a 2018 Janet L. Andersen Award for Undergraduate Research in Mathematical or Computational Biology. BethAnna participated in Michigan State University’s 2018 Summer Undergraduate Research in Experimental Mathematics program and presented her work at MathFest 2018. After graduating, she plans to pursue a Ph.D in either Applied Mathematics or Computational Biology. Congratulations BethAnna! 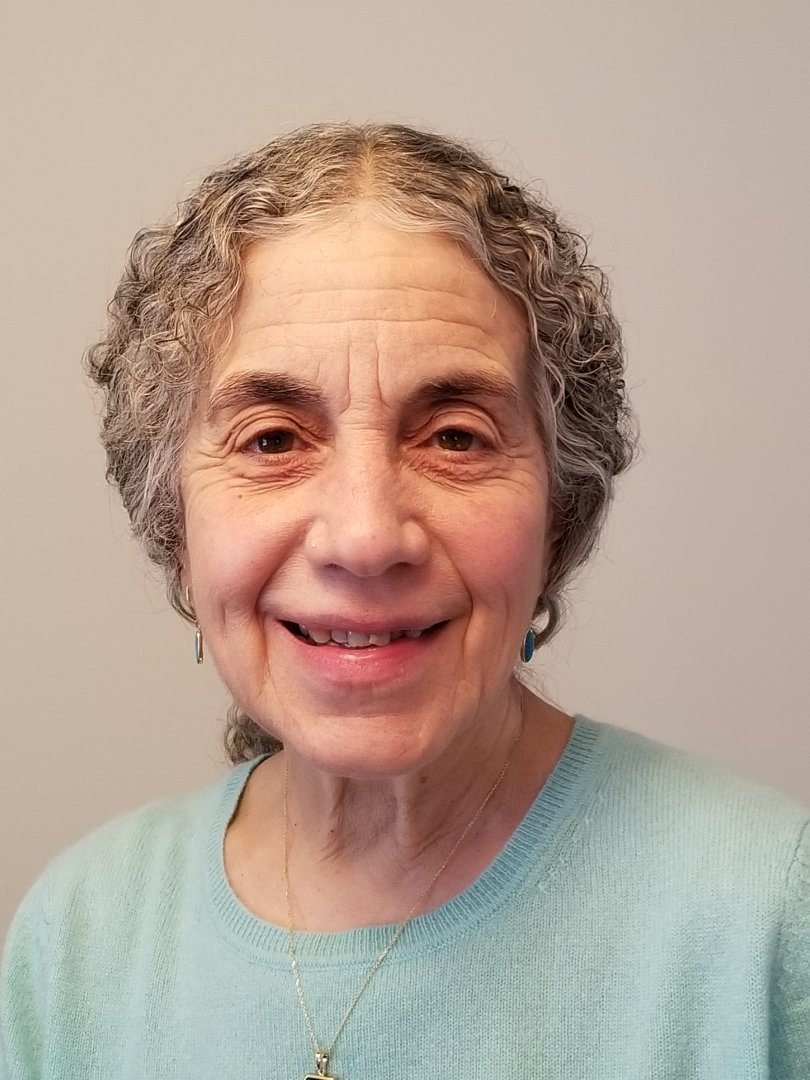 Distinguished Teaching Professor Olympia Nicodemi was awarded a 2018 Drs. Carol and Michael Harter Endowment for Faculty Mentoring Award. The award is given yearly to a faculty member whose commitment to teaching goes beyond the classroom to the students' intellectual or creative development. Congratulations Professor Nicodemi! 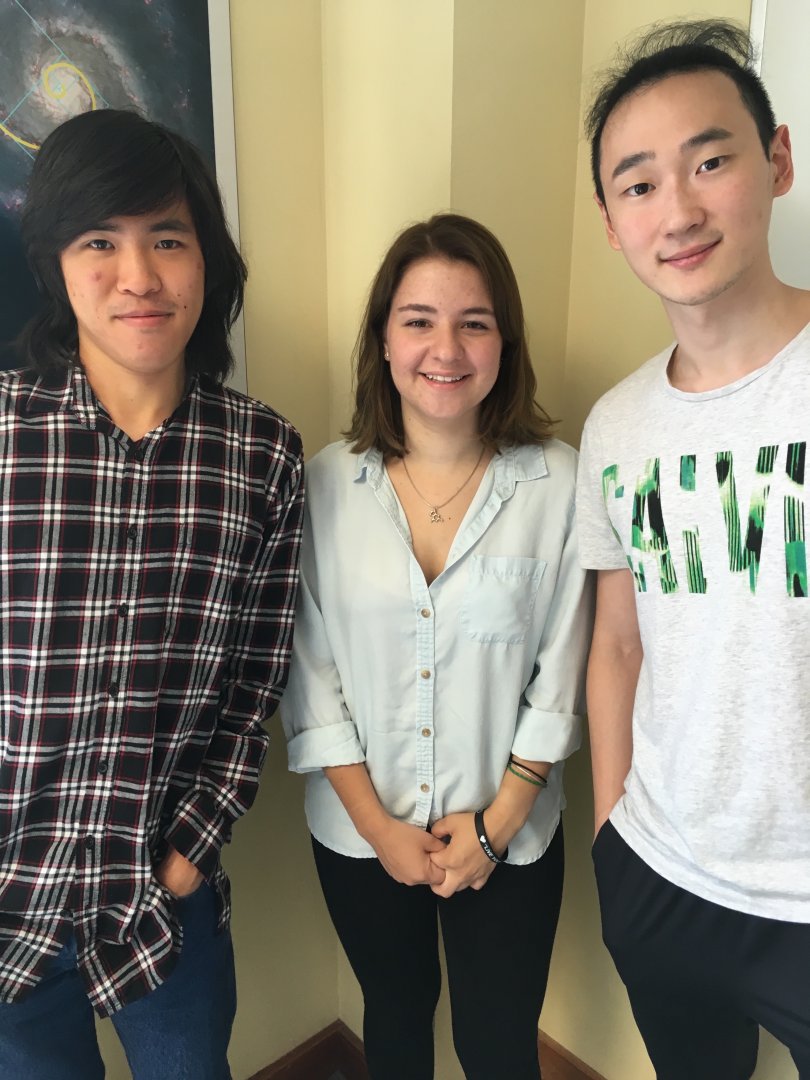 Eric Piato, Barbara J. Schweitzer, and Joon-yeob (Julian) Lee (all Math 2020) co-author the paper Spectral characterizations of anti-regular graphs with Professor Cesar Aguilar; the paper was published in the journal Linear Algebra and Its Applications and contains the results of their research performed over the 2018 summer session. 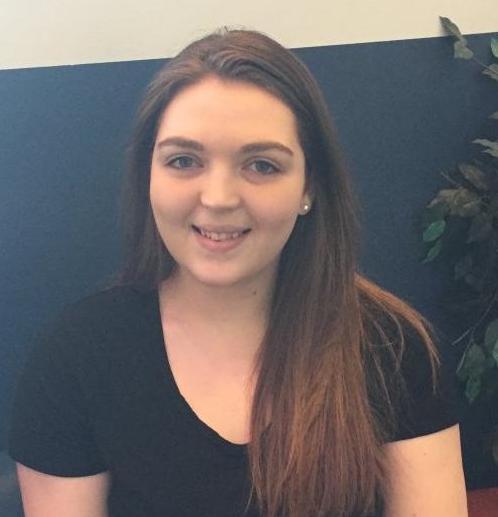 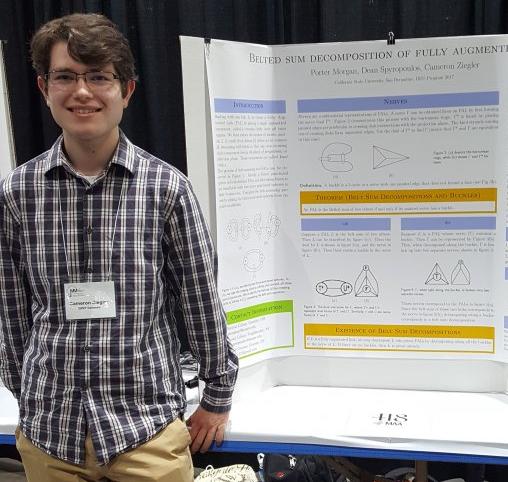 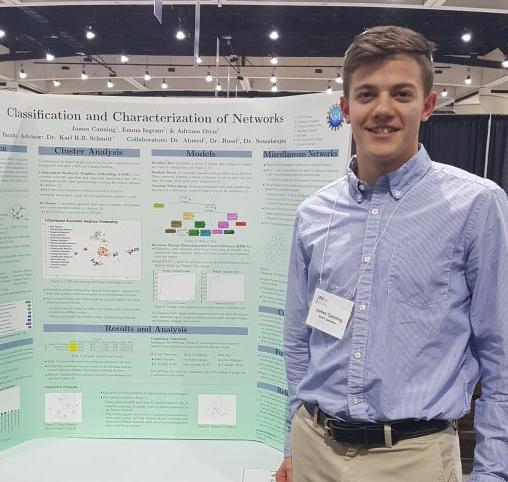 James Canning (2020) attended the 2018 Joint Mathematics Meetings and won an  Outstanding Poster award.   James' research poster was on the Classification and Characterization of Networks and the research was performed at Valparaiso University.  Congrats James! 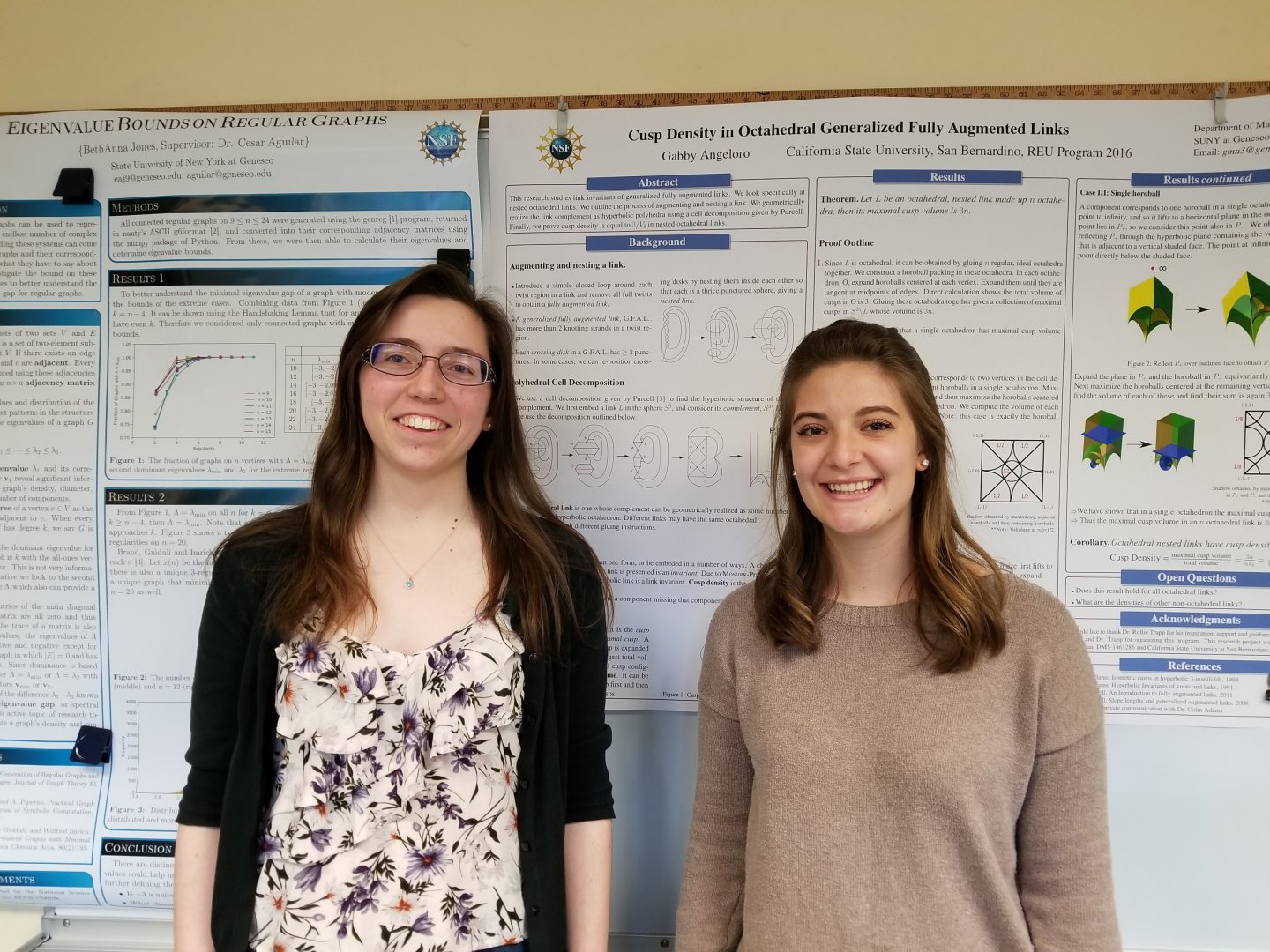 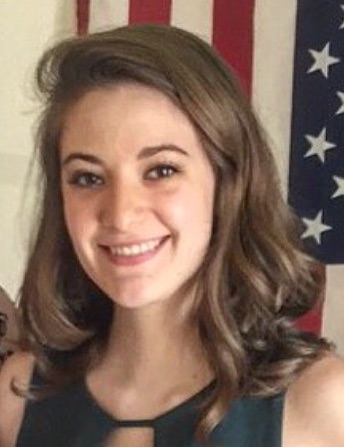 Gabby Angeloro (Math 2018) participated in the Budapest Semesters in Mathematics (BSM) in the 2017 spring semester. Initiated by Paul Erdős, László Lovasz, and Vera T. Sós, the BSM provides a unique opportunity for North American undergraduates to study under the tutelage of eminent Hungarian scholars. ( more details)

Gary Towsley, distinguished teaching professor of mathematics, is among the country's top undergraduate professors named in The Princeton Review's new guidebook "The Best 300 Professors." "To be honest, I'm not surprised to hear about Gary's selection as one of the country's best," said Provost Carol Long. "His reputation as a consummate scholar is well-known on our campus, and I frequently hear from students about the impact he has on their learning, both inside and outside of the classroom." In its profile of Towsley, The Princeton Review editors cited his "ability to account for the varying levels of skill and understanding in his classes by trying to challenge those who already understand the material, while simultaneously being patient and supportive with those who feel they are lost." LAMRON Article 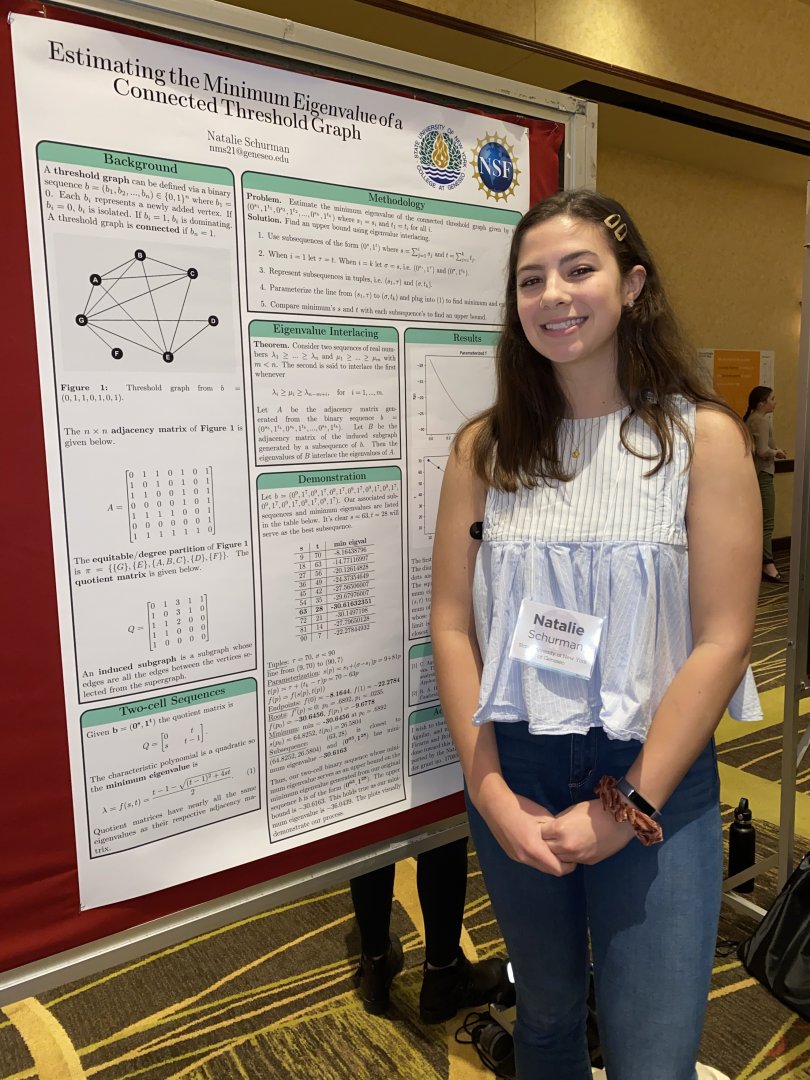 Natalie Schurman attended the 22nd Nebraska Conference for Undergraduate Women in Mathematics and presented her research results on Estimating the Minimum Eigenvalue of a Connected Threshold Graph obtained over the 2019 summer with colleagues Brittany Sullivan, Matt Ficarra and Professor Cesar Aguilar. 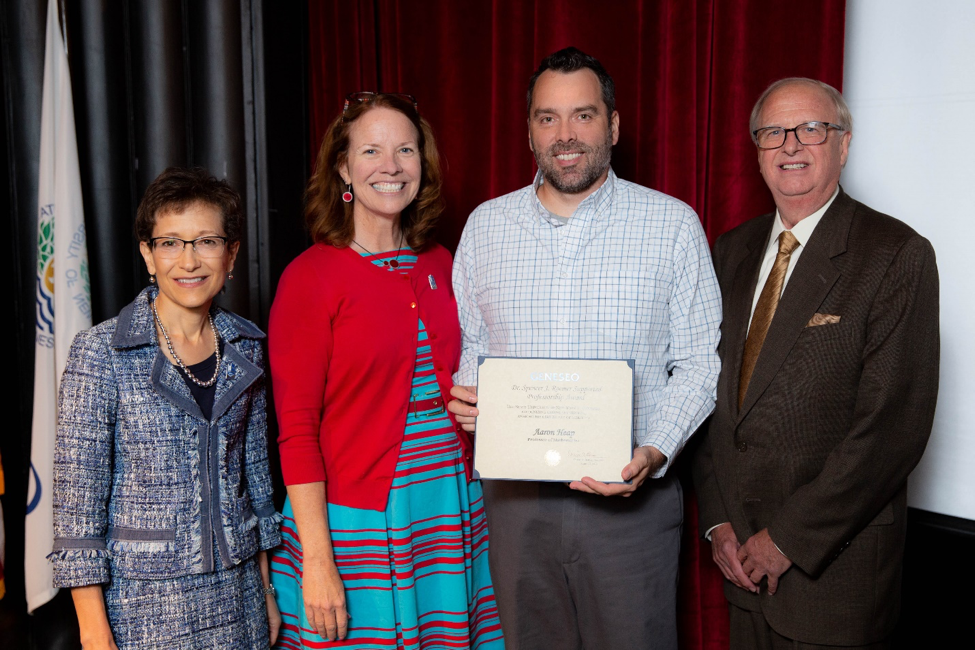 Associate Professor Aaron Heap received the Dr. Spencer J. Roemer Supported Professorship for 2019-2022. A Geneseo Professorship is bestowed to faculty member who has demonstrated superior teaching, involves students in the learning process, demonstrates superior advisement, both formal and informal, and has a visible and meaningful involvement in campus life, and an active scholarly life. 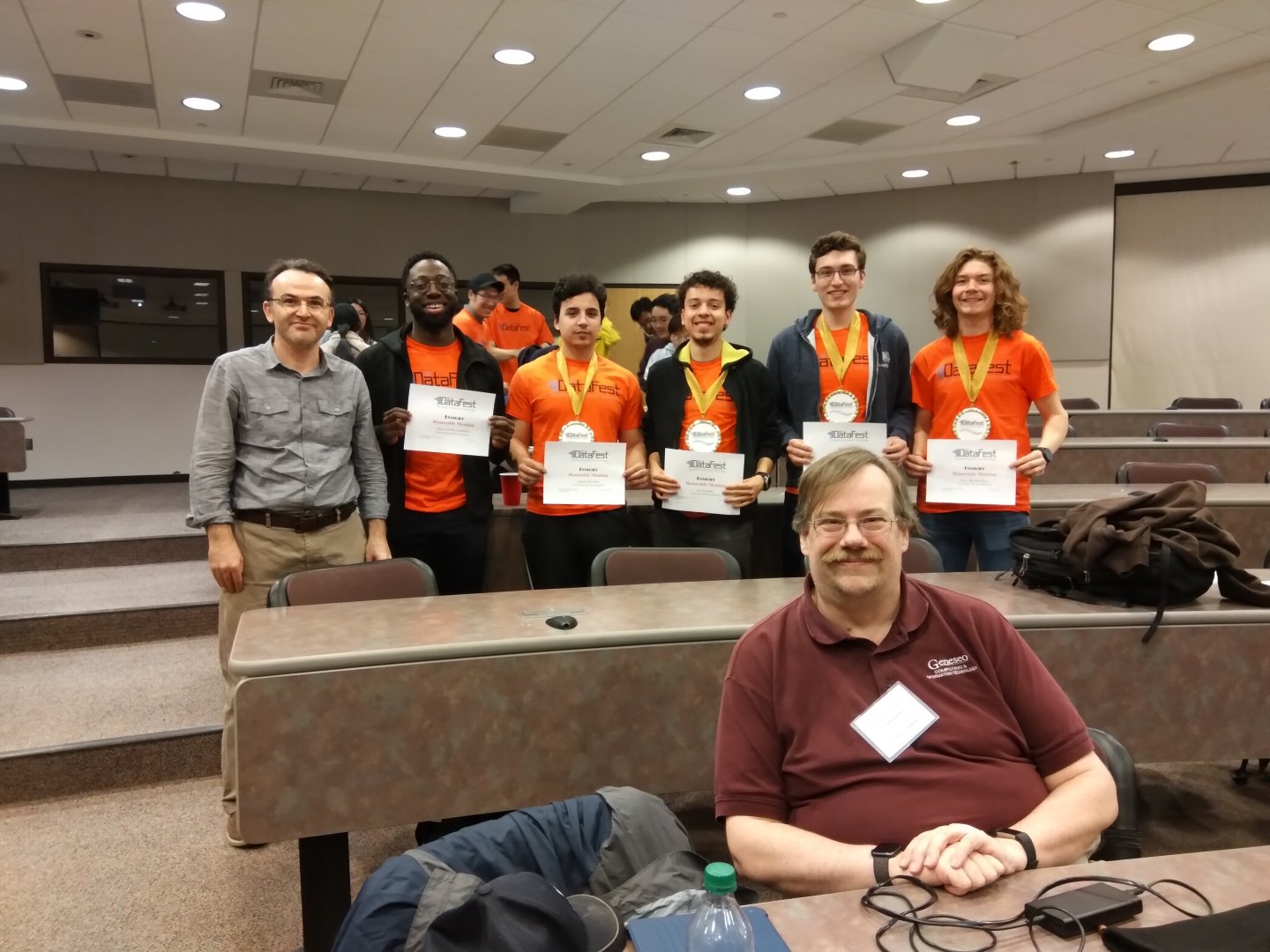 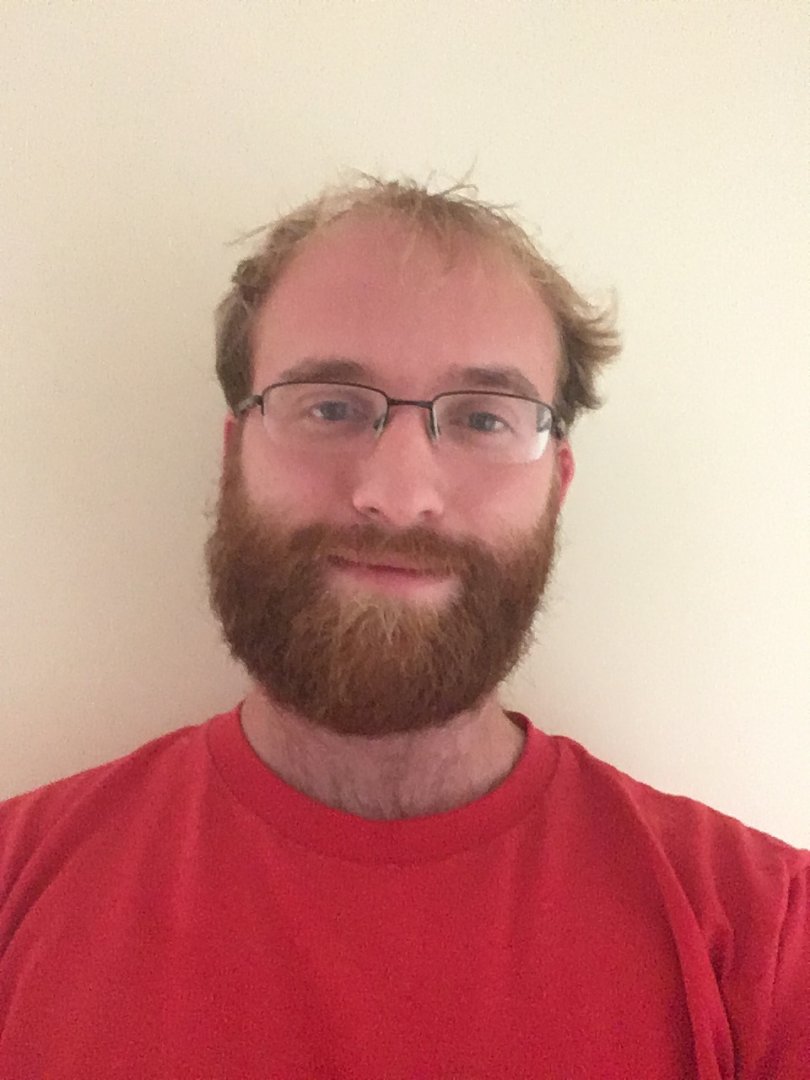 Douglas Knowles (Math 2015) and Professor Aaron Heap published the paper Tile Number and Space-Efficient Knot Mosaics in the Journal of Knot Theory and Its Ramnifications.  Douglas is currently pursuing a PhD in Mathematics at Dartmouth College. 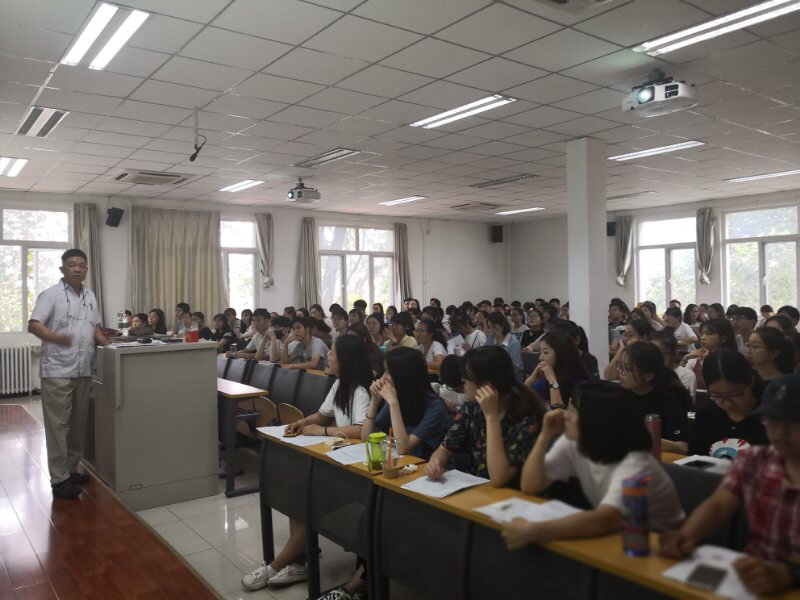 Associate Professor of Mathematics Chi-Ming Tang gave a lecture at the Beijing Geological Science University on "Actuarial Science" on July 3, 2018. 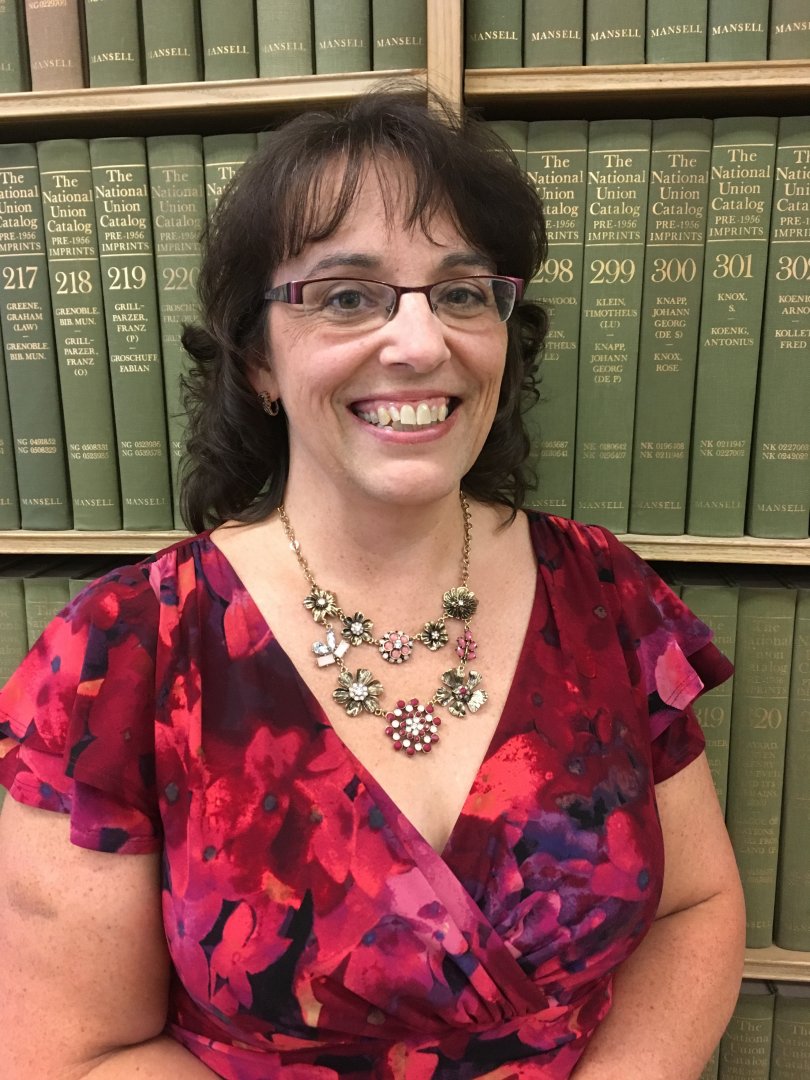 Professor Lisa Smith was a recipient of a 2018 SUNY Chancellor's Awards for Excellence in Teaching. The Chancellor's awards are SUNY-level honors conferred to acknowledge and provide system-wide recognition for consistently superior professional achievement and to encourage the ongoing pursuit of excellence. Congratulations Professor Smith! 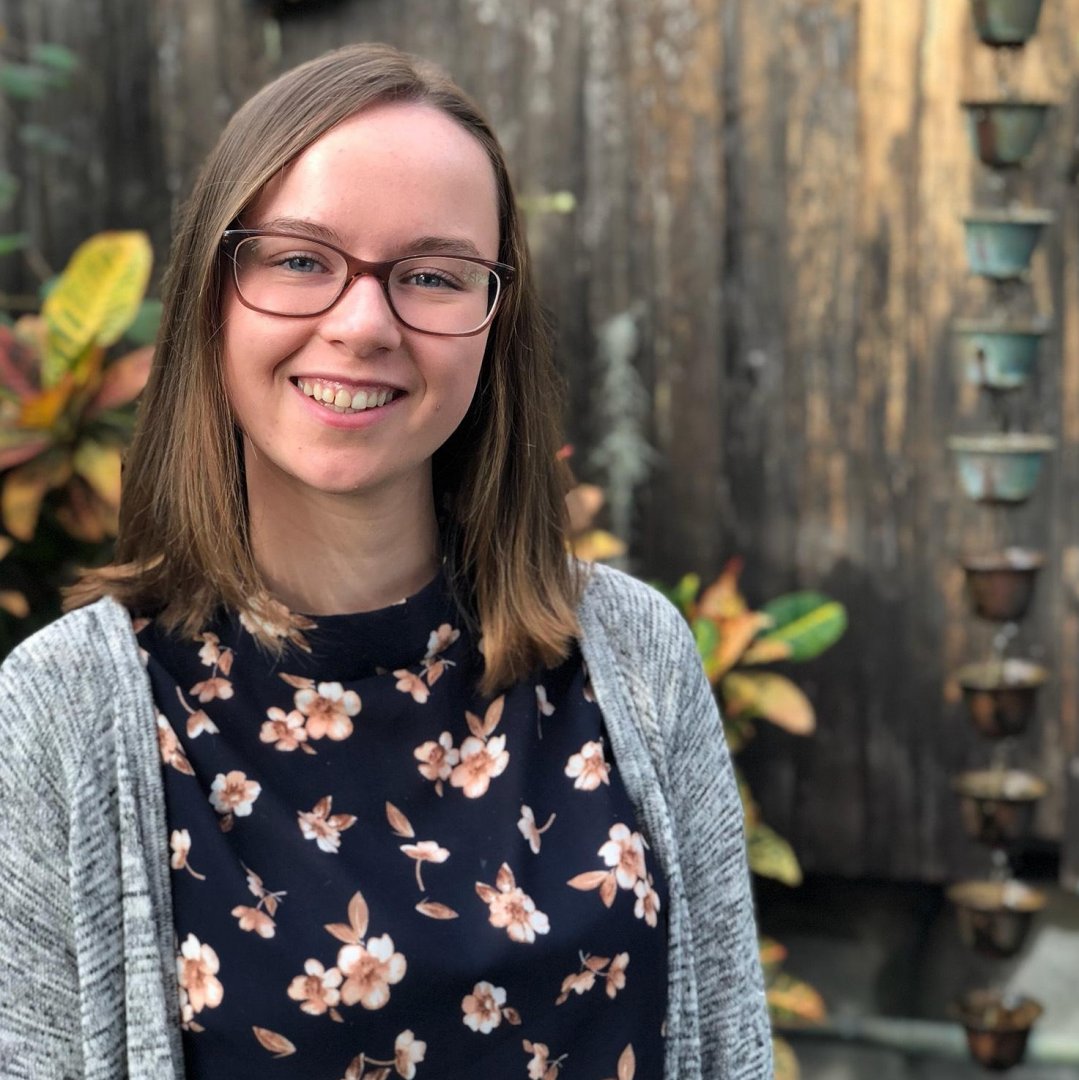 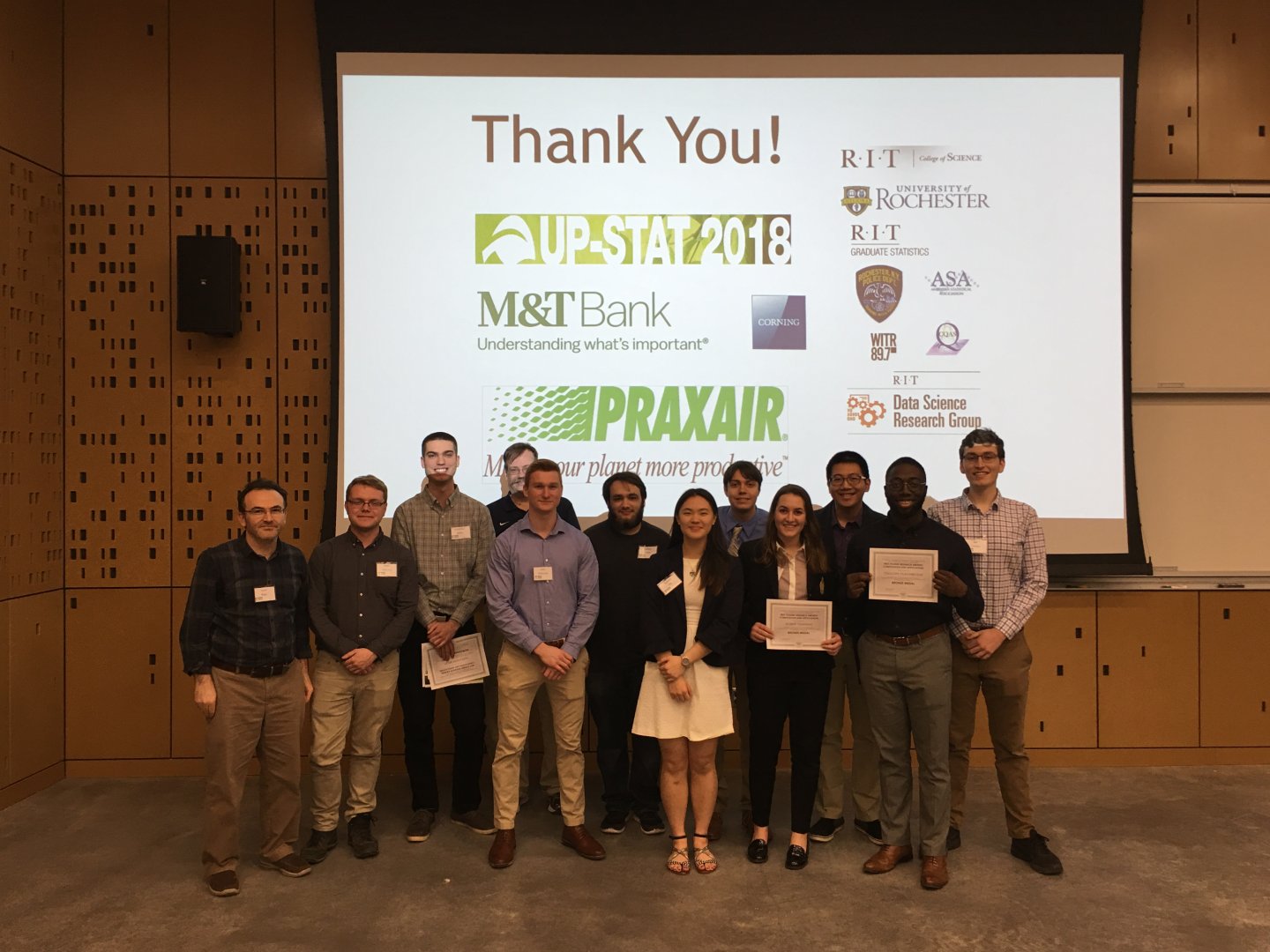 At the 2018 UPSTAT Conference of the American Statistical Association in Statistics and Data Science, six teams of Geneseo Math students presented their capstone projects in Probability, Statistics, Machine Learning, and Stochastic Modeling. Three Geneseo teams won awards (two bronzes and one honorable) on the Computation and Applications category, in which a total of 20 teams from other regional colleges and universities were evaluated and only six teams received awards. 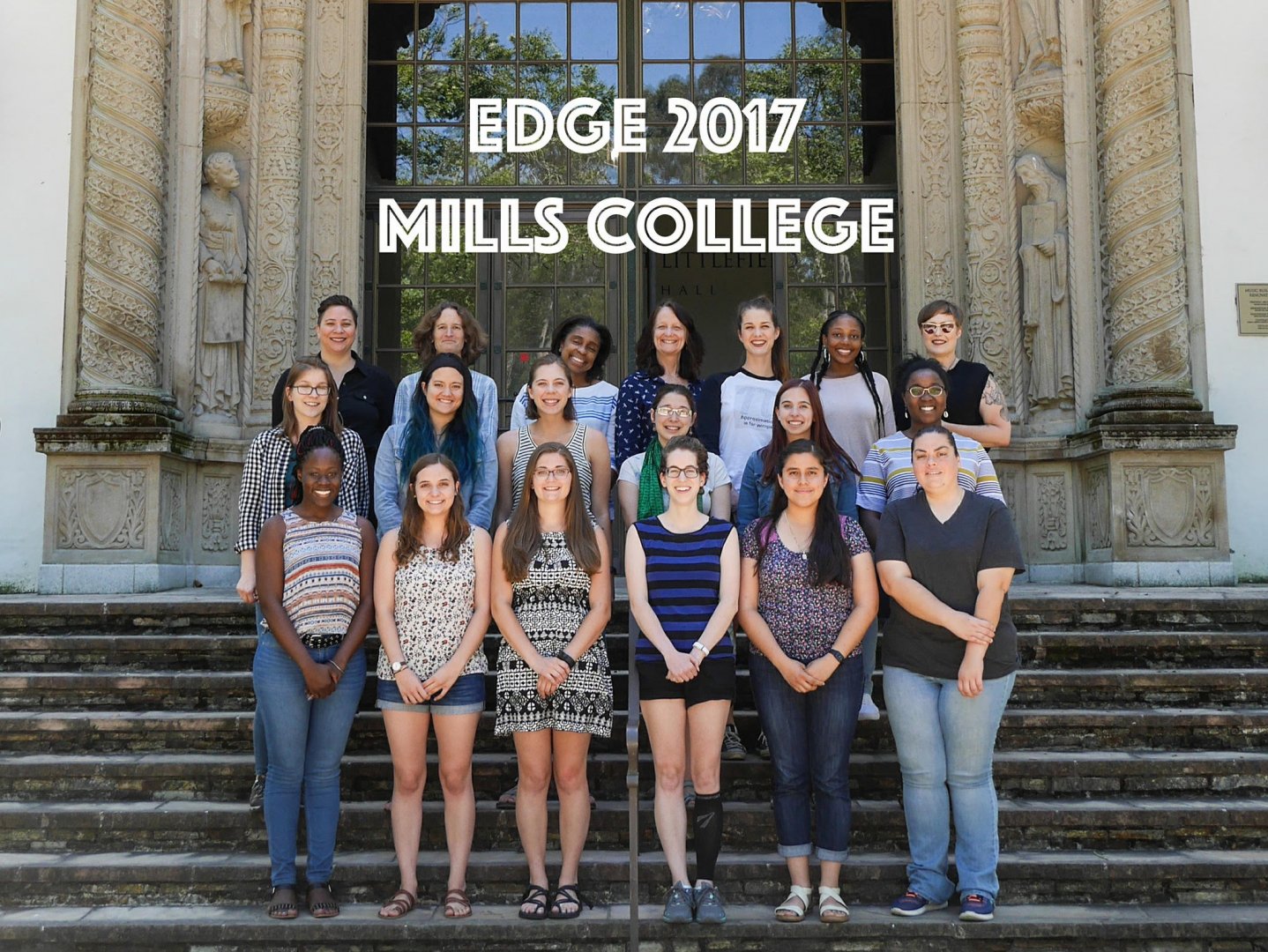 Jenna Zomback (Math 2017) was selected to participate in the the EDGE program for women ( more details).  Jenna was also selected as a SUNY Geneseo Presidential Scholar for the 2016-17 academic year. 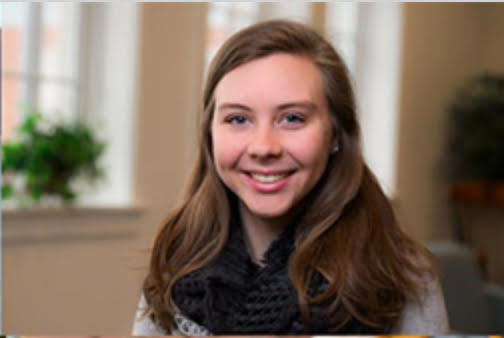 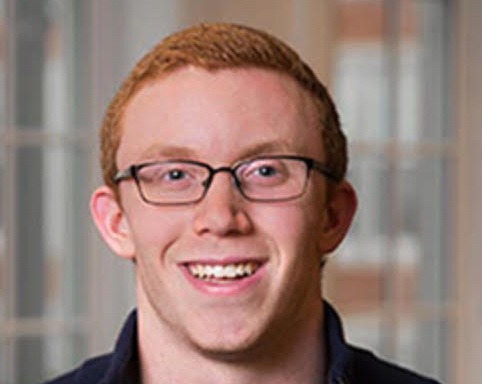 Jeffrey Doser (Biology/Math 2017) was among the 240 recipients of scholarships that the Goldwater Scholarship and Excellence in Education Foundation awarded to juniors and sophomores from the United States who intend to pursue research careers in the natural sciences, mathematics and engineering. ( more detais) 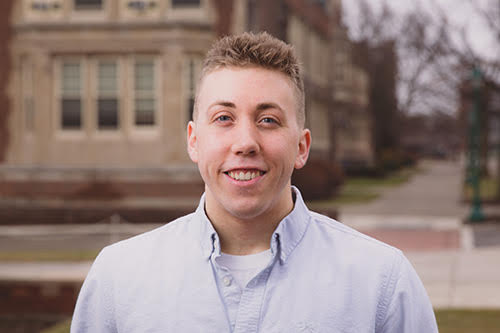 Shayne O'Brien (Applied Math/Spanish 2017) won a prestigious National Science Foundation (NSF) Graduate Research Fellowship in the area of Computer/IS/Machine Learning and was accepted into a graduate program at the Massachusetts Institute of Technology (MIT). ( more detais) 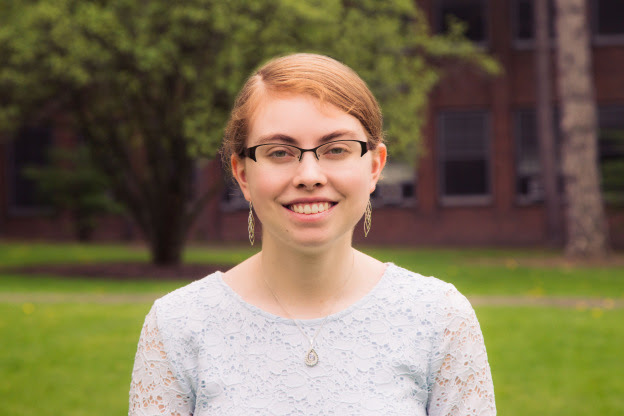 Stephanie Allen (Math 2017) presented at 2017 MathFest supported by Pi Mu Epsilon, and won the MAA Environmental Math Special Interest Group Student Speaker Award. Stephanie also co-authored a paper published in SIAM SIURO and her paper A Two-Stage Vehicle Routing Algorithm Applied to Disaster Relief Logistics after the 2015 Nepal Earthquake was one of the finalists of 2017 INFORMS Undergraduate OR Paper Competition.  Stephanie also won a 2017  Chancellor’s Award for Student Excellence  and was selected as a SUNY Geneseo Presidential Scholar for the 2016-17 academic year. 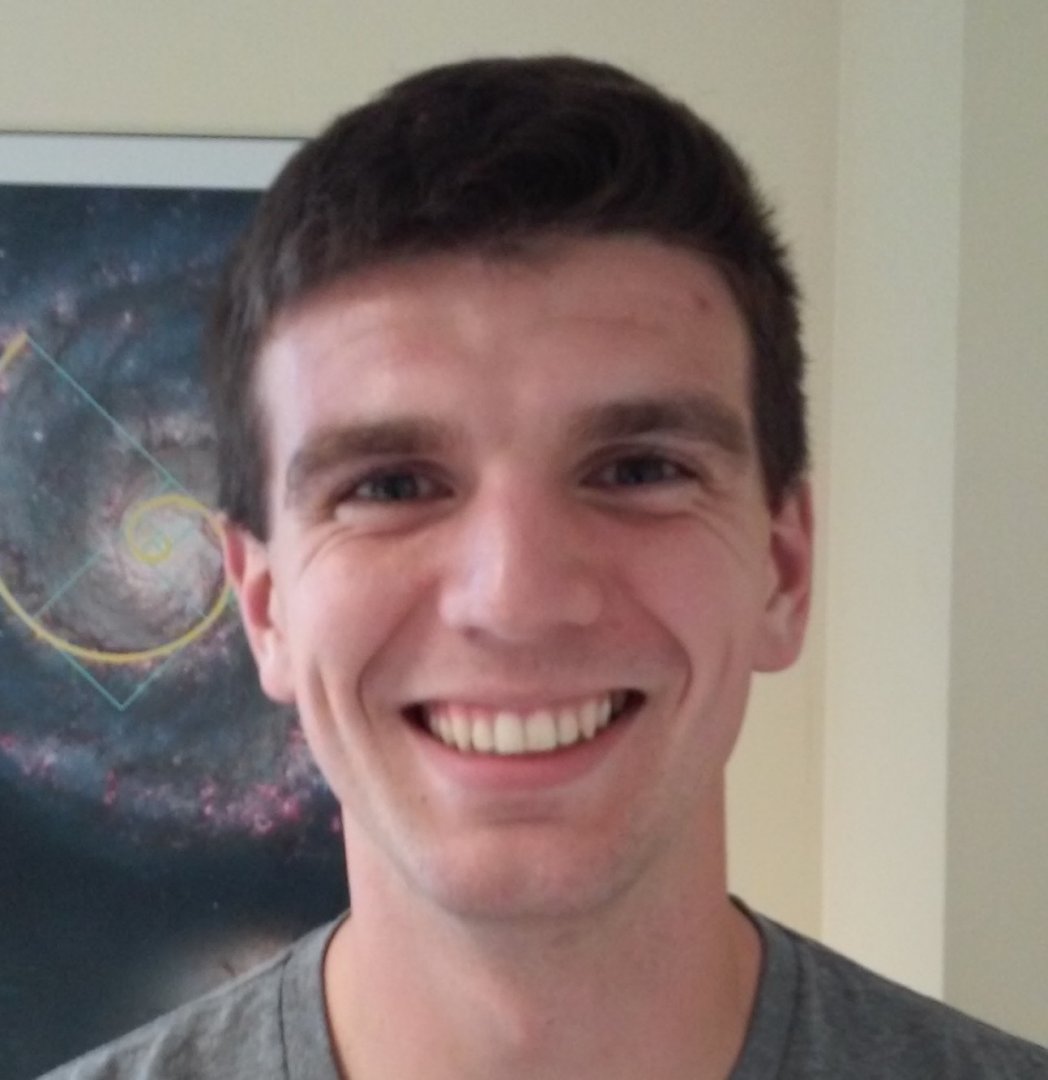 Justen Geddes (Math 2018) was selected as a SUNY Geneseo Presidential Scholar for 2017-2018. Presidential Scholars at SUNY Geneseo are top-achieving members of the senior class who exemplify Geneseo's institutional values and assist the Provost and President in promoting academic excellence on campus.  In 2018, Justen was awarded the SUNY Chancellor's Award for Student Excellence, the highest honor bestowed upon a student by the SUNY. 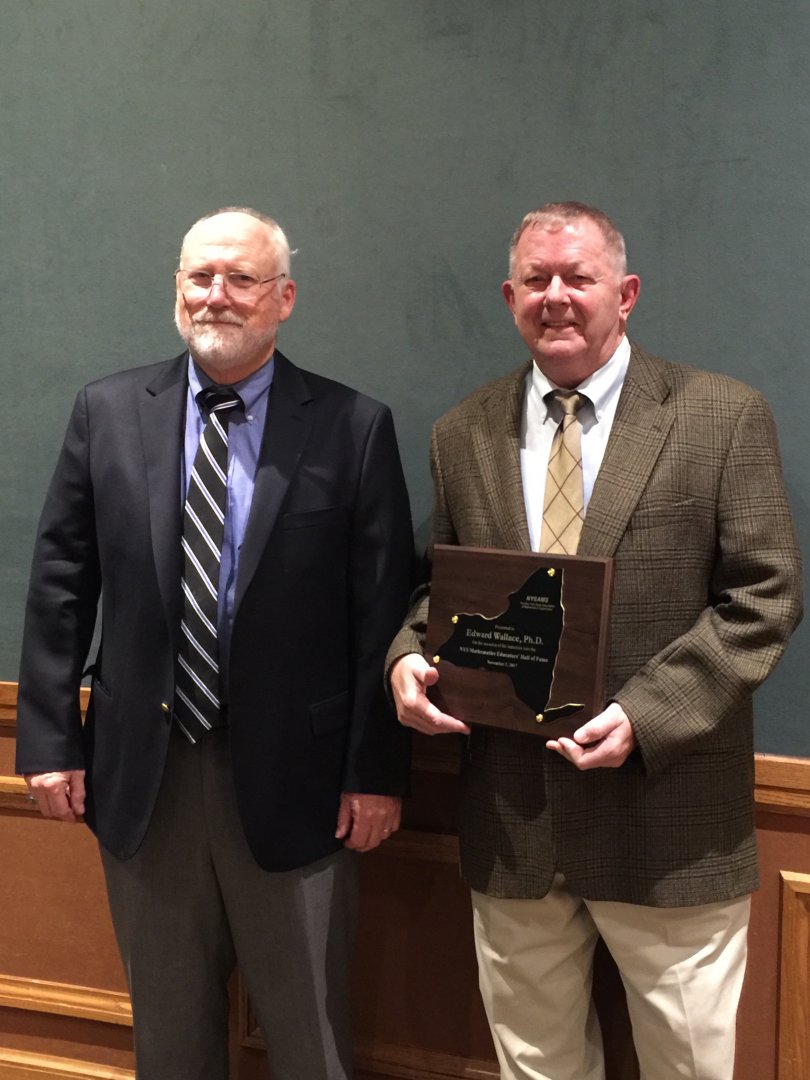