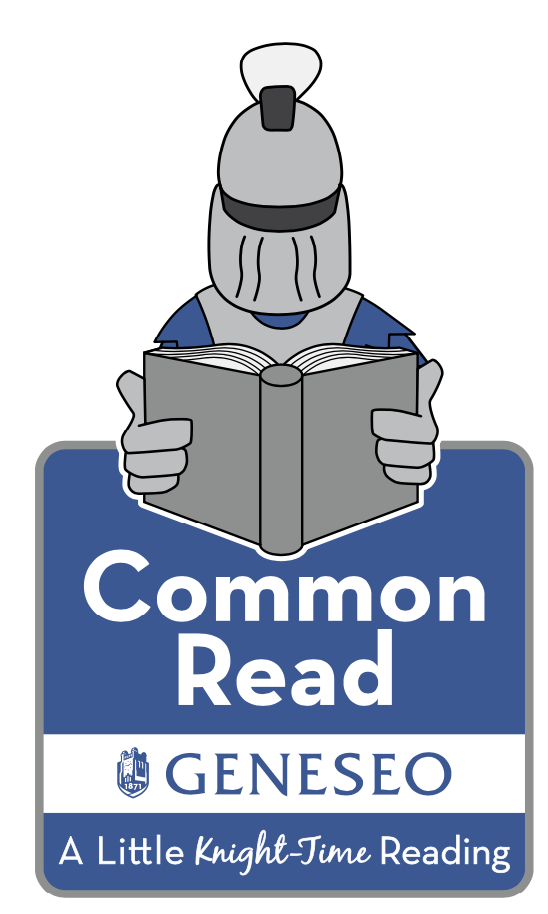 Each year, faculty and staff come together to choose a book that will introduce students to the interconnected academic environment at SUNY Geneseo. Student cohorts from across campus (Living-Learning Communities, Edgar Fellows, Access Opportunity Programs, etc) participate in the read over the summer and throughout the year.  Lectures, events, and classes throughout the year are linked to this book to demonstrate the integrated nature of learning.

The first event is a book discussion led by faculty and staff before classes start.

An online, 1-credit course based on this book (CMRD 101) is offered both semesters and is open to all students as well as students who are a part of a summer cohort, so all can participate in this integrated and reflective learning opportunity.

Knight Time current and previous books can be purchased at the Geneseo Bookstore!  Stop by the College Union and look for the display or purchase them online.

Designing Your Life (How to Build a Well-Lived, Joyful Life)  by Bill Burnett & Dave Evans

**Do not purchase the book as an incoming student! A generous donor has funded the purchase and mailing of this book to ALL INCOMING students.**

Designers create worlds and solve problems using design thinking. Look around your office or home—at the tablet or smartphone you may be holding or the chair you are sitting in. Everything in our lives was designed by someone. And every design starts with a problem that a designer or team of designers seeks to solve.

In this book, Bill Burnett and Dave Evans show us how design thinking can help us create a life that is both meaningful and fulfilling, regardless of who or where we are, what we do or have done for a living, or how young or old we are. The same design thinking responsible for amazing technology, products, and spaces can be used to design and build your career and your life, a life of fulfillment and joy, constantly creative and productive, one that always holds the possibility of surprise.

In the linked essays that make up her debut collection, This Is One Way to Dance, Sejal Shah explores culture, language, family, and place. Throughout the collection, Shah reflects on what it means to make oneself visible and legible through writing in a country that struggles with race and maps her identity as an American, South Asian American, writer of color, and feminist. This Is One Way to Dance draws on Shah's ongoing interests in ethnicity and place: the geographic and cultural distances between people, both real and imagined. Her memoir in essays emerges as Shah wrestles with her experiences growing up and living in western New York, an area of stark racial and economic segregation, as the daughter of Gujarati immigrants from India and Kenya. These essays also trace her movement over twenty years from student to teacher and meditate on her travels and life in New England, New York City, and the Midwest, as she considers what it means to be of a place or from a place, to be foreign or familiar.

2020-2021 Books: March: Book 1 by John Lewis, Andrew Aydin, and Nate Powell. Congressman John Lewis (GA-5) is an American icon, one of the key figures of the civil rights movement. His commitment to justice and nonviolence has taken him from an Alabama sharecropper's farm to the halls of Congress, from a segregated schoolroom to the 1963 March on Washington, and from receiving beatings from state troopers to receiving the Medal of Freedom from the first African-American president.

March is a vivid first-hand account of John Lewis' lifelong struggle for civil and human rights, meditating in the modern age on the distance traveled since the days of Jim Crow and segregation. Rooted in Lewis' personal story, it also reflects on the highs and lows of the broader civil rights movement.

Book One spans John Lewis' youth in rural Alabama, his life-changing meeting with Martin Luther King, Jr., the birth of the Nashville Student Movement, and their battle to tear down segregation through nonviolent lunch counter sit-ins, building to a stunning climax on the steps of City Hall.

Info about Why They Marched:Why They Marched by Susan Ware. For far too long, the history of how American women won the right to vote has been told as the tale of a few iconic leaders, all white and native-born. But Susan Ware uncovered a much broader and more diverse story waiting to be told. Why They Marched is a tribute to the many women who worked tirelessly in communities across the nation, out of the spotlight, protesting, petitioning, and insisting on their right to full citizenship.  We meet Mary Church Terrell, a multilingual African American woman; Rose Schneiderman, a labor activist building coalitions on New York’s Lower East Side; Claiborne Catlin, who toured the Massachusetts countryside on horseback to drum up support for the cause; Mary Johnston, an aristocratic novelist bucking the Southern ruling elite; Emmeline W. Wells, a Mormon woman in a polygamous marriage determined to make her voice heard; and others who helped harness a groundswell of popular support. We also see the many places where the suffrage movement unfolded—in church parlors, meeting rooms, and the halls of Congress, but also on college campuses and even at the top of Mount Rainier. Few corners of the United States were untouched by suffrage activism.Ware’s deeply moving stories provide a fresh account of one of the most significant moments of political mobilization in American history. The dramatic, often joyous experiences of these women resonate powerfully today, as a new generation of young women demands to be heard.

Susan Ware is a celebrated feminist historian and biographer, is the author of American Women’s History: A Very Short Introduction and Letter to the World: Seven Women Who Shaped the American Century, among other books. She is the editor of American Women’s Suffrage: Voices from the Long Struggle for the Vote, 1776–1965 and is Honorary Women’s Suffrage Centennial Historian at Radcliffe’s

The 2019 book was: Brown Girl Dreaming by Jacqueline Woodson. Raised in South Carolina and New York, Woodson always felt halfway home in each place. In vivid poems, she shares what it was like to grow up as an African American in the 1960s and 1970s, living with the remnants of Jim Crow and her growing awareness of the Civil Rights movement. Touching and powerful, each poem is both accessible and emotionally charged, each line a glimpse into a child’s soul as she searches for her place in the world. Woodson’s eloquent poetry also reflects the joy of finding her voice through writing stories, despite the fact that she struggled with reading as a child. Her love of stories inspired her and stayed with her, creating the first sparks of the gifted writer she was to become.

Jacqueline Woodson is the 2014 National Book Award Winner for Young People’s Literature for her New York Times bestselling memoir Brown Girl Dreaming, which was also a recipient of the Coretta Scott King Award, a Newbery Honor Award, the NAACP Image Award, and the Sibert Honor Award. She is the author of more than two dozen award-winning books for young adults, middle graders, and children; among her many accolades, she is a four-time Newbery Honor winner, a three-time National Book Award Finalist, and a two-time Coretta Scott King Award winner. She lives with her family in Brooklyn, New York.

The 2018 book was We Rise: the Earth Guardians Guide to Building a Movement that Restores the Planet by Xiuhtezcatl Martinez, a 17-year old indigenous environmental activist and hip hop artist. Xiuhtezcatl came to campus in October 2018 as the President's Sustainability Lecturer. For more information, visit Xiuhtezcatl's website.

Beginning with the empowering story of the Earth Guardians and how Xiuhtezcatl has become the voice of a generation, We Rise explores all aspects of effective activism and provides step-by-step information on how to start or join a solution-oriented movement.  If you are interested in creating real and radical change, We Rise will give you the inspiration and information you need to make the world a better place and leave you asking: If I don't step up, who will?