The Tiny eHouse project was begun in Dr. Padalino's experimental sustainable energy class in the fall of 2017. Since then, research has been done on many different forms of sustainable living and the possibility of creating such a home on campus for student housing and research. 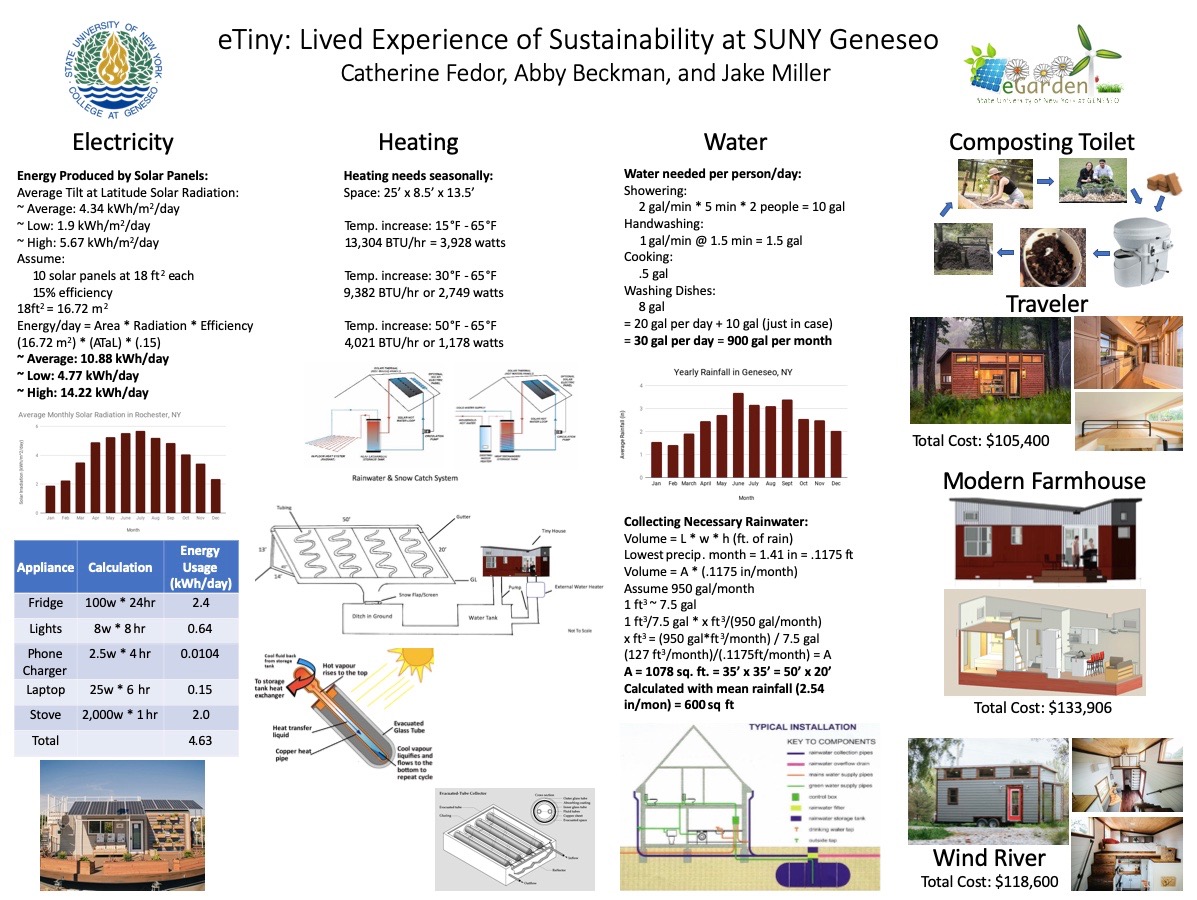 The plan for this tiny house is to attach solar panels to the roof to provide energy for the house. Based on the calculations we did, taking into account the square footage of the roof and the energy that would be needed to power the house, we would be able to provide all the energy needed for most of the year. Only during winter months might there be an issue, and we could either wire the house to the rest of the eGarden to draw off of its power during this time, or we could temporarily plug in the batteries to charge them as needed.

In order to supply all water needed by the house we would set up water collection from the roof as well as in a secondary array that we'd build next to the house. Since this is different from most tiny homes, because it is stationary, we are able to supply all of our water through rainwater collection. The adjacent array will be described further as it relates to the evacuated tube solar collectors. The rainwater collection would supply all water for showers and dish washing, a tank for water filtration would filter this water and treat it to make it safe for drinking and cooking water. Again, based upon the square footage of the roof combined with the array, as well as the amount of rainfall throughout the year in Geneseo, the entire water supply needed by the house could be provided. Water would be stored in large 500 gallon tanks partially buried in the ground to protect them from freezing during the winter months. This water would be pumped into the house to then pass through the heat exchanger and be used throughout the day. While we made high estimates in our calculations to allow for more water usage than is absolutely necessary, an important part of the experience of living in the tiny house will be keeping track of their water usage to make sure they don't run out.

Evacuated tube solar collectors are a lesser known method of using the power of the sun for our own devices. These collectors use the sun to heat up liquid inside of a tube, this liquid can be water or an alcohol that will remain liquid at lower temperatures. The liquid is heated up and pumped through a heat exchanger, basically a hot water heater. This passes the heat from the solar collector into water which is then used as hot water in the house, and can also be used for radiant heating of the house.

Radiant heating is a system of heating a house by running hot liquid through tubes in the floors and also potentially the walls to gradually heat them. Systems like this are sometimes seen in bathrooms with tile floors to heat them up so they're more comfortable to walk on. In this less frivolous application, tubing would be run throughout the floor and in the walls to consistently heat up the house. Tubing is only run in the bottom half of the walls to avoid the risk of puncturing them when hanging pictures or other decorations. Radiant heating would mean we wouldn't have to rely on any carbon inputs to heat the house, not burning wood or natural gas, and not using electricity. This system is also quite safe since it doesn't rely on any kind of open flame and it's all self-contained.

A composting toilet is a must for any tiny house. It significantly eliminates the necessity of a septic tank to essentially pump human waste into the ground, and converts a waste product into useable fertilizer. Composting toilets separate liquid waste from solid, the ammonia in liquid waste is what causes most of the smell. This can be watered down and used on plants right away. The solid waste from the toilet has not composted enough to be used when it is removed from the toilet, it should be added to a compost pile, and when it has turned into the consistency of top soil it can be used as fertilizer for non-edible plants.

The plan is to devise a system where as many students as possible could get exposure to this form of sustainable living; two students at a time would live in the tiny house for a period of two weeks. During this time they would be asked to keep a record of their energy usage as well as keeping a journal of what it was like to live in the Tiny House, of what worked well for them and what didn't. We'd also ask that they do a little livestream at least once during their time in the tiny house to show people what it was like to live with limited space, perhaps cook a meal as an example. We'd also ask that the students give a presentation on their experience to their residence halls once they return. In this way, many more than the fourteen or so students that would get to live in the tiny house each semester would have exposure to this new kind of living.

The Tiny House project has been presented many times with the hope of acquiring funding, but funding for a project of this scope is hard to come by. Similar iterations of such a project have been discussed, including a Tiny Village, wherein tiny homes could be constructed one at a time as funds become available, and could be worked into a network that shares energy. This would also create a more communal atmosphere for the students living in the tiny homes, and perhaps they could be inhabited for longer periods of time. Also, by having more students living in this village at a time, they can develop a greater sense of community and adapt to tiny house life together.

Similar to the tiny village, a series of earth berm homes have also been considered. We could use large diameter corrugated steel pipe, partially buried in the ground, to create more affordable housing alternatives. Again, this could be completed in stages as funds become available. After initially installing the pipes and waterproofing them, they could be finished one at a time. These pipes would be about ten feet in diameter and about twenty feet long and laid side by side so that they are all covered by the earth together. One end of each pipe would be fully glass and open to let the sun in, while the other end would be connected to a communal area set up in a pipe running perpendicular to the others. This area would house the bathroom, living area, and a kitchen to be shared by the residents of the earth berm community. This community would house about ten people split between five different tubes. The big draw for earth berm homes is their incredible energy efficiency, the coverage by the earth really gives them an advantage for regulating the temperature, it can draw heat away from the house in the summertime, and provide a source of heat during the winter. Other sustainable technologies, such as solar panels to supply electricity for the homes, would also be included.