The garden is a one-acre, off-grid education and research facility on the west side of campus that focuses on renewable energy, organic agriculture and sustainable organic waste management.

The eGarden was established in 2015 through the efforts of Dan Dezarn, the director of sustainability, Stephen Padalino, Distinguished Teaching Professor of Physics, the facilities department, and many students. It was created as a hub for SUNY Geneseo's sustainability efforts. It exists on a one-acre plot on the northwest side of the campus. The eGarden serves as a home base for student research on sustainability as well as for the composting program and organic farming at the college. The ongoing work at the eGarden is a cooperative effort, involving students, faculty, the Office of Sustainability, facilities management, and Campus Auxiliary Services, among others.

In addition to students voluntarily working on projects throughout the school year, the eGarden hires several students each summer to conduct research. This way students can devote more of their time to a project than they would be able to during the school year, and a lot of progress can be made in a relatively short amount of time. 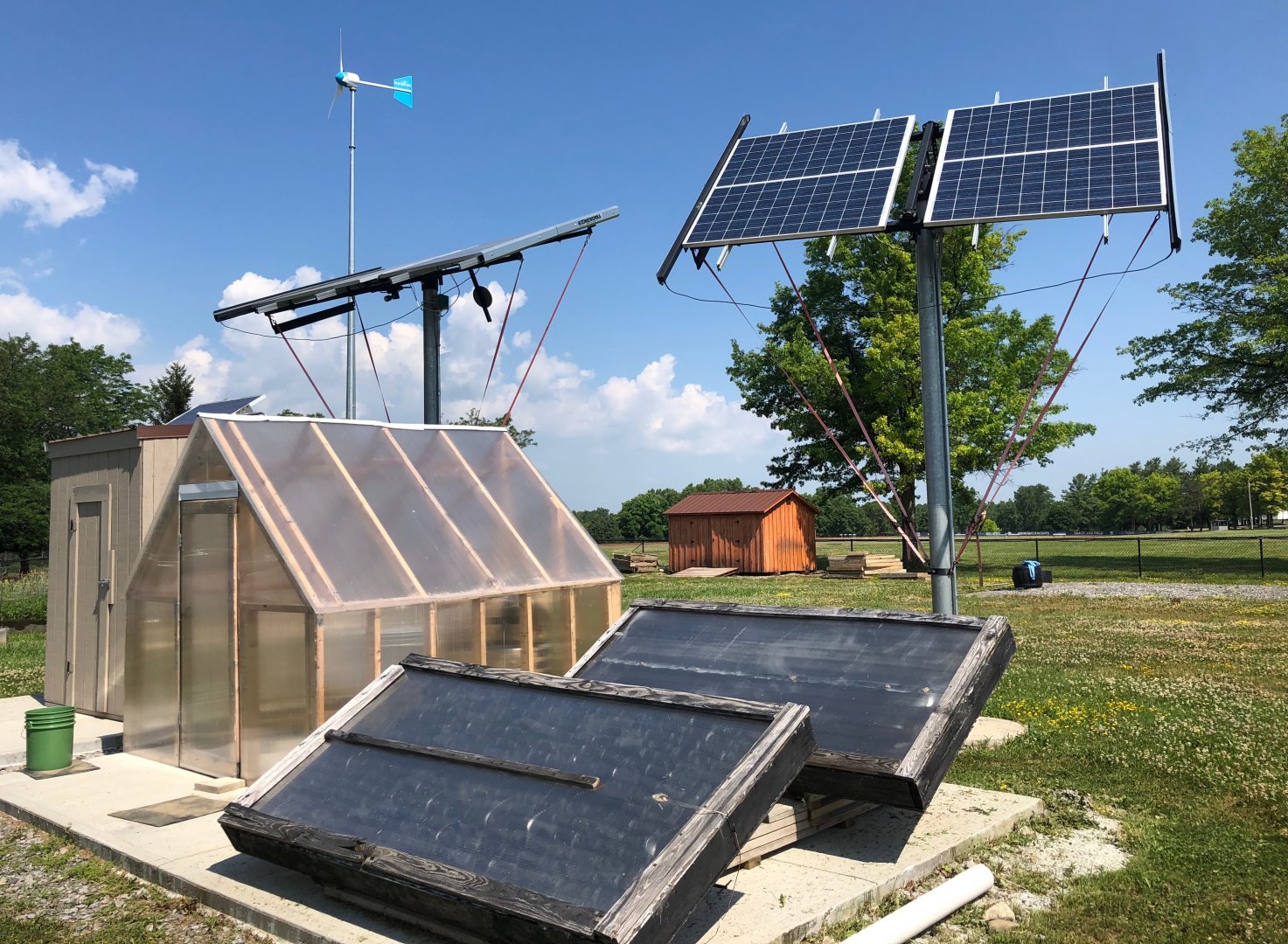 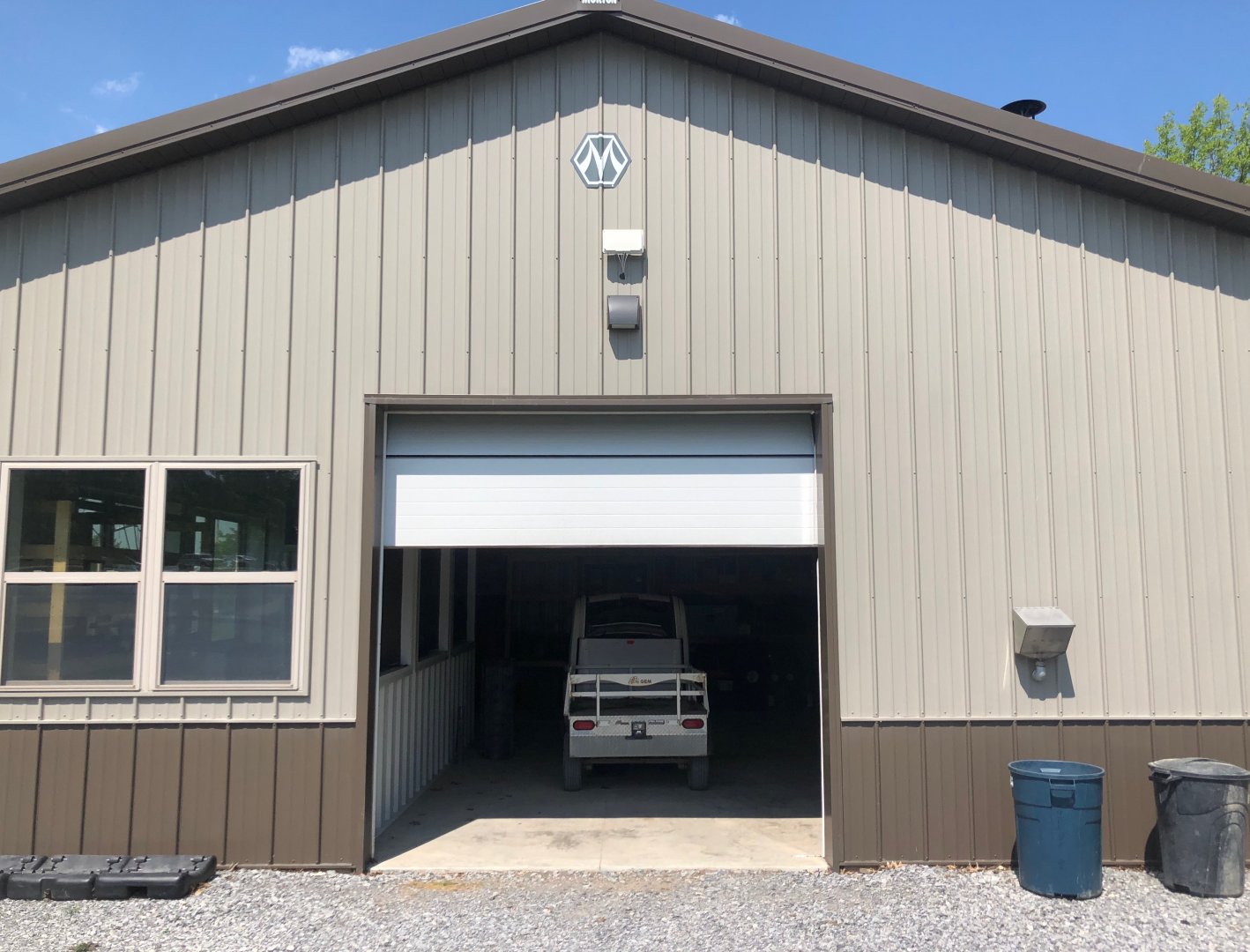 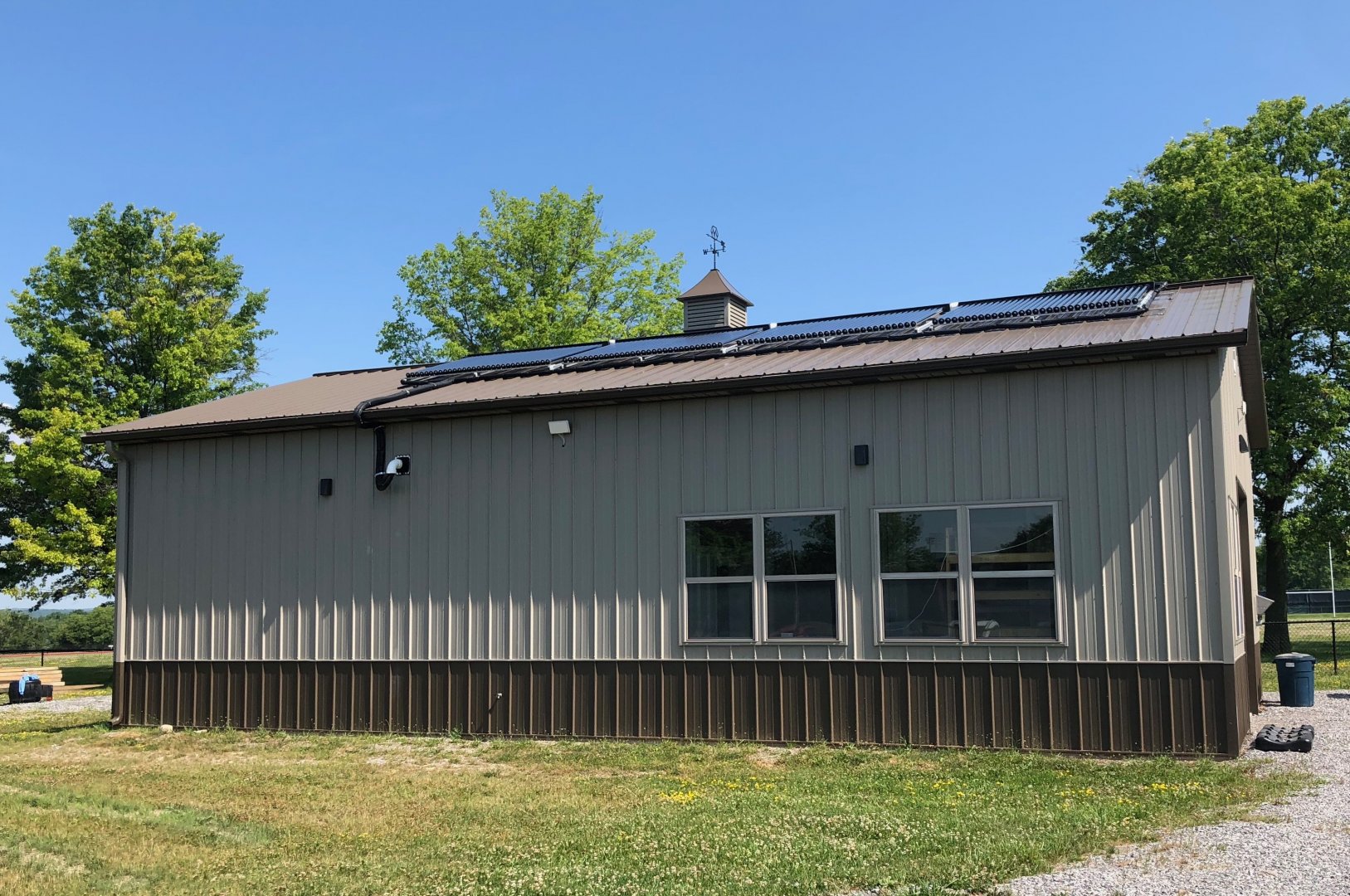 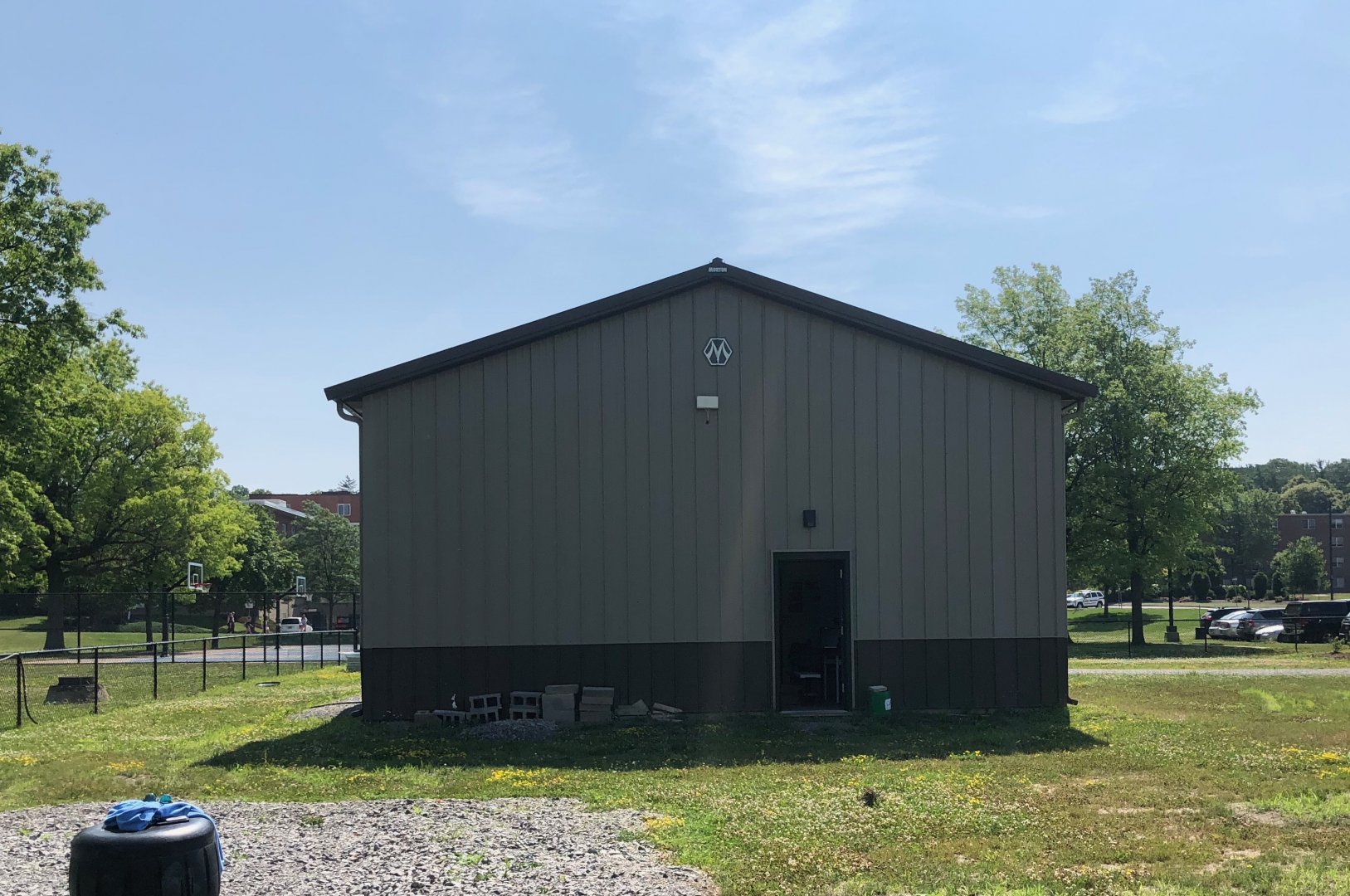 The barn was built in late 2015 and funded by Campus Auxiliary Services to serve as a workspace for sustainability projects at the college. It currently serves as a home to the composting and farming programs at the college, and runs off of a microgrid with power supplied by the wind turbine and solar arrays installed in the eGarden. It is also heated by renewable energy, with radiant heating in the floor powered by evacuated tube solar collectors on the roof.

The eGarden is lucky enough to have a designated research lab in the basement of Newton, the lecture hall on campus. The lab has workspaces for all of the major projects and is also a great resource for the storage of equipment many of our projects require. It offers a quiet work environment where students have the opportunity to share a space with others interested in similar sustainability-related projects.

The eGarden contains several conventional renewable energy generating devices, and some experimental ones. The conventional devices are tied into the function of the eGarden. Each of these tools helps to decrease the eGarden's carbon footprint and bring it closer to carbon neutral.

All of the power generated by the wind turbines and the solar arrays is stored in the eGarden itself in a battery bank. These batteries are necessary because the sun isn't shining all of the time, and the wind is not blowing all of the time. So, in times when there is no power being produced, we can access the stored energy and use that instead of having to draw power from the grid.

Each power generating device is attached to a different set of batteries, and the power can be drawn selectively from each of the devices. The eGarden is connected to the grid, just in case more power is needed than is collected with renewable energy sources, but as the site matures it will be able to function solely on renewables. 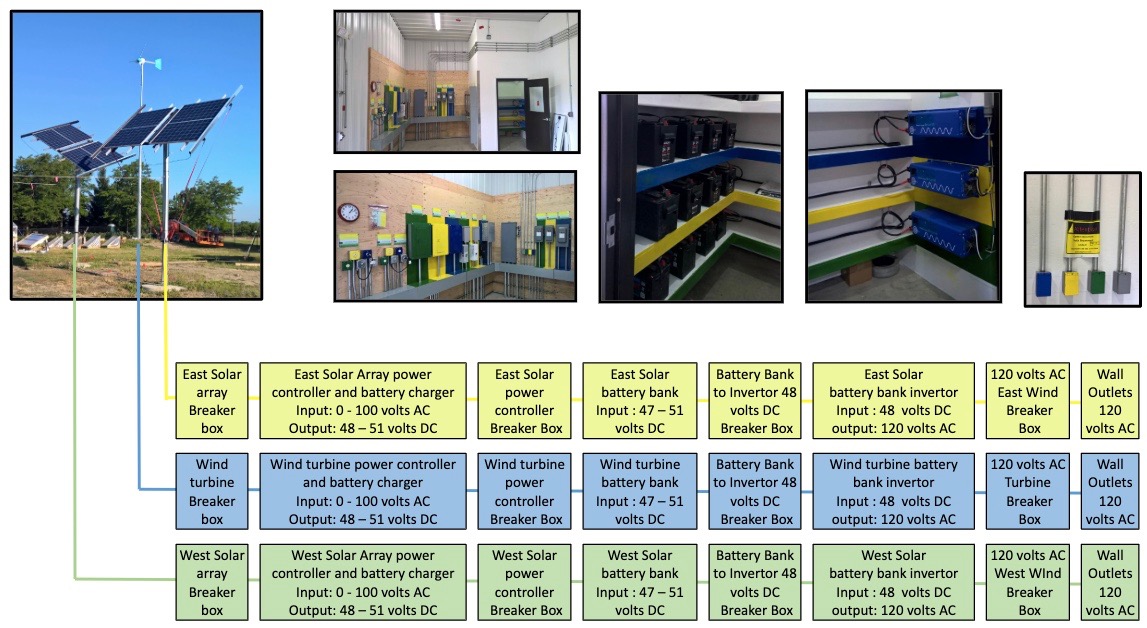 The 12 foot diameter, 3.5 kW turbine was installed in 2016 with the creation of the eGarden. It provides power to the blue circuit and connected battery bank in the eGarden. 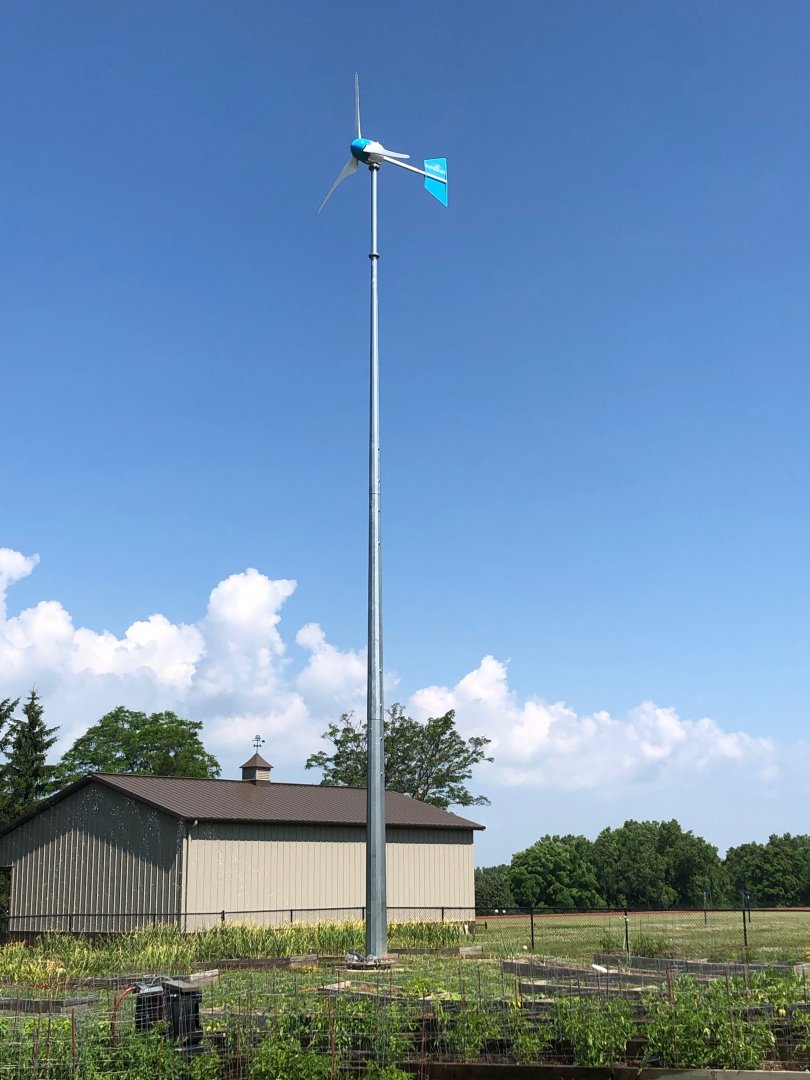 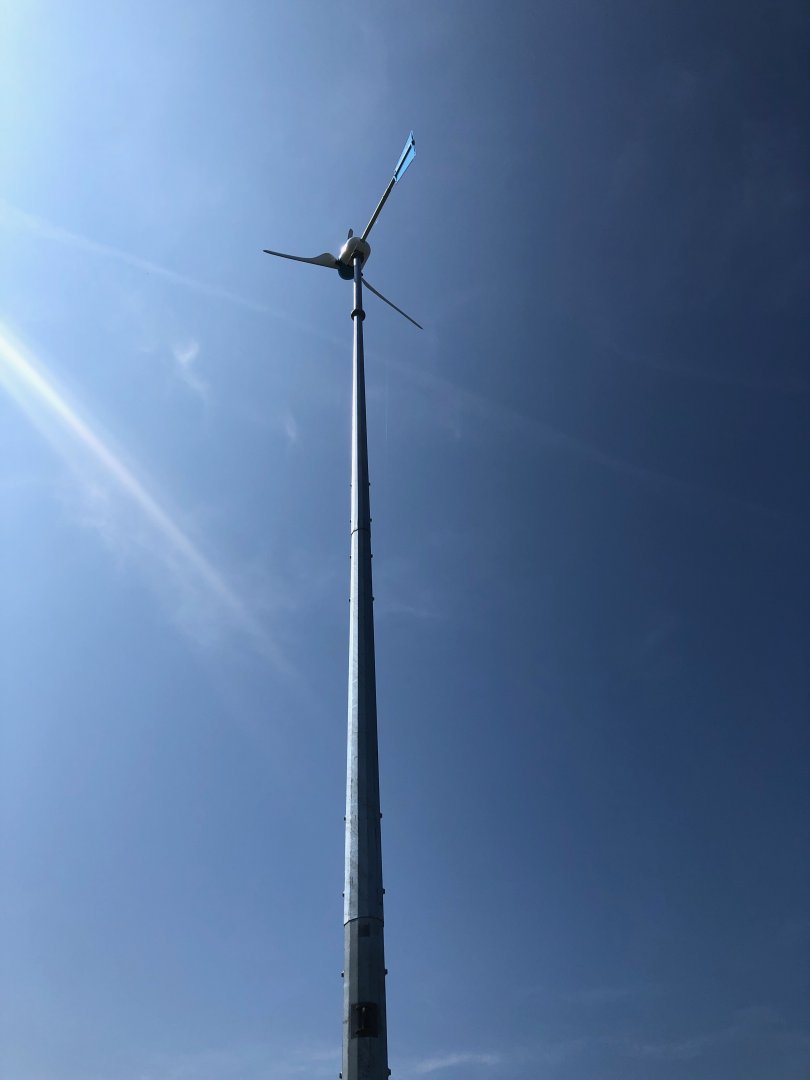 The eGarden contains two tracking solar arrays on its southern side. The "tracking" feature means that they can track the sun as it moves across the sky from east to west throughout the day. Ty2his technology allows the panels to optimize the amount of sun they collect. 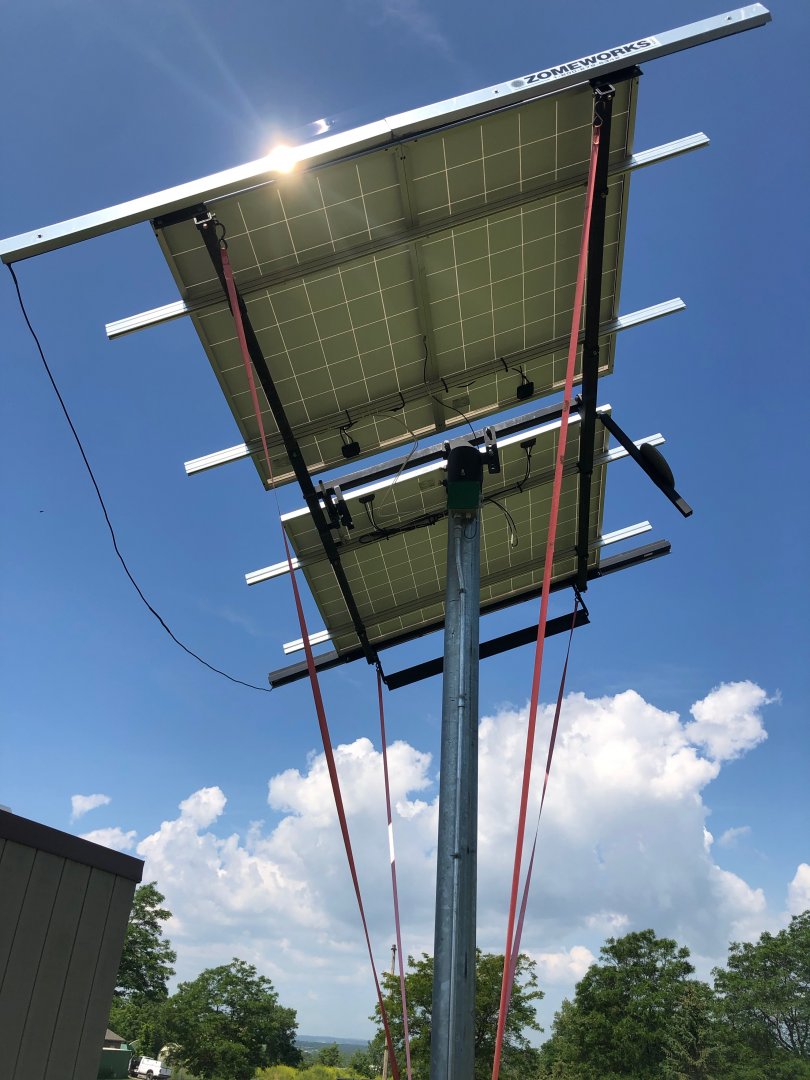 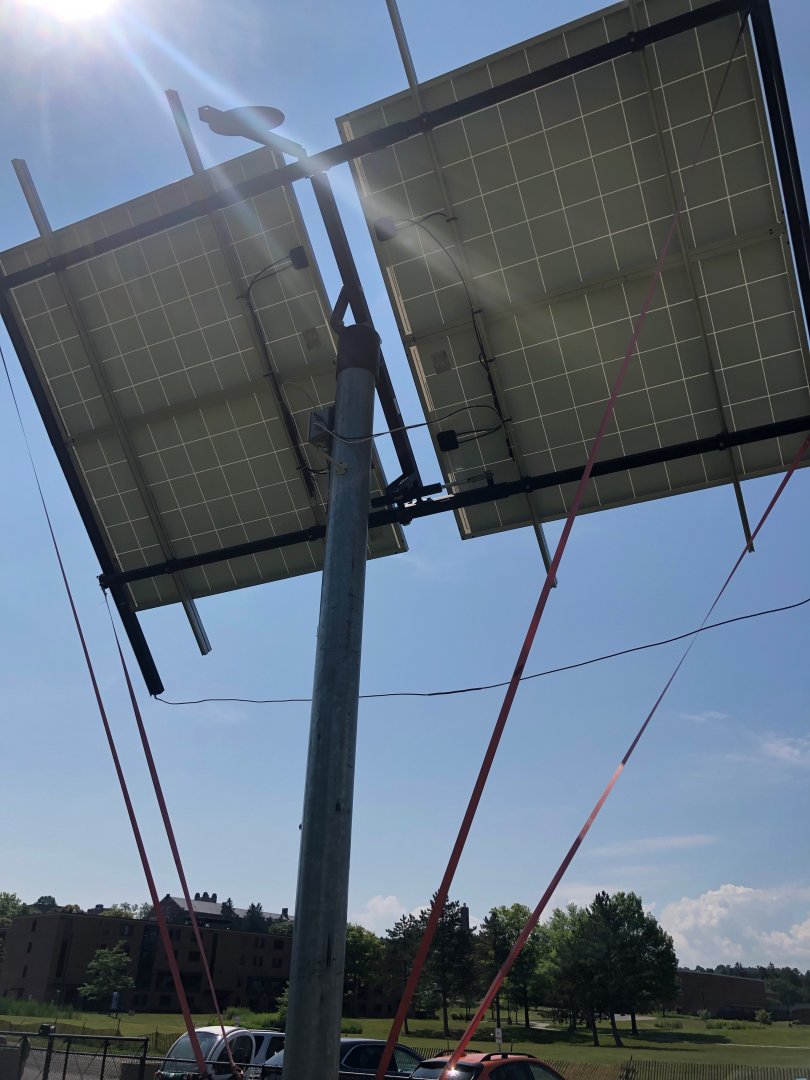 The roof of the eGarden contains four solar collectors that are pretty unique, they function in heating up water and are called evacuated tube solar collectors, they produce 6 kW of power. They contain an alcohol mixture that is heated up and pumped through the tubing into a heat exchanger in the building, this works essentially like a hot water tank does. The water in the tank is heated up by the mixture and is then pumped through tubing that was laid in the floor before the concrete was poured. This creates a fossil fuel free system of powering radiant heating, this is sufficient to keep the building above freezing on even the coldest of winter days. There is also a gas heater in the building that can be run off of the biodiesel produced by our biodiesel generator for the particularly cold days. 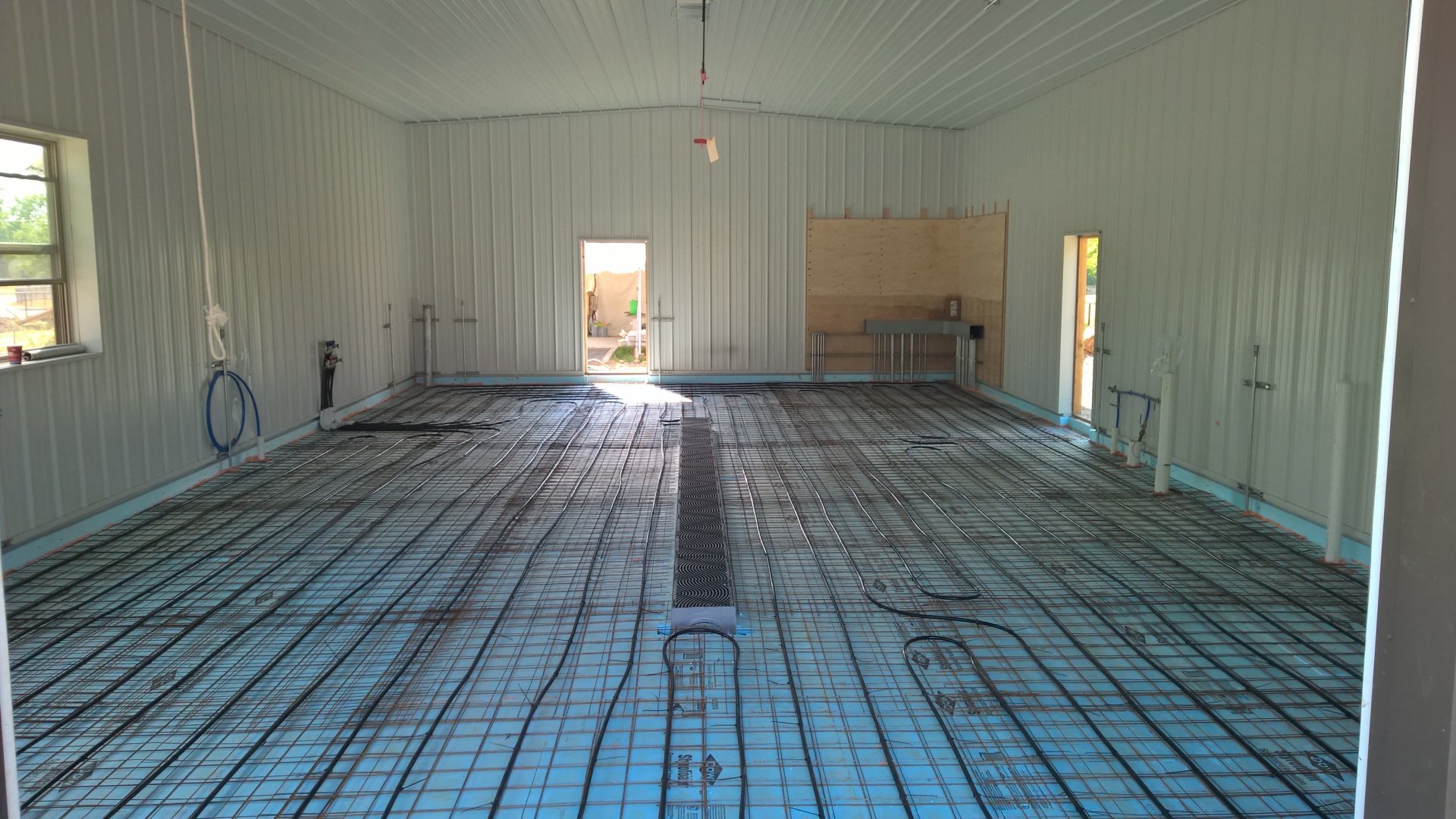 Tubing for the radiant heat. 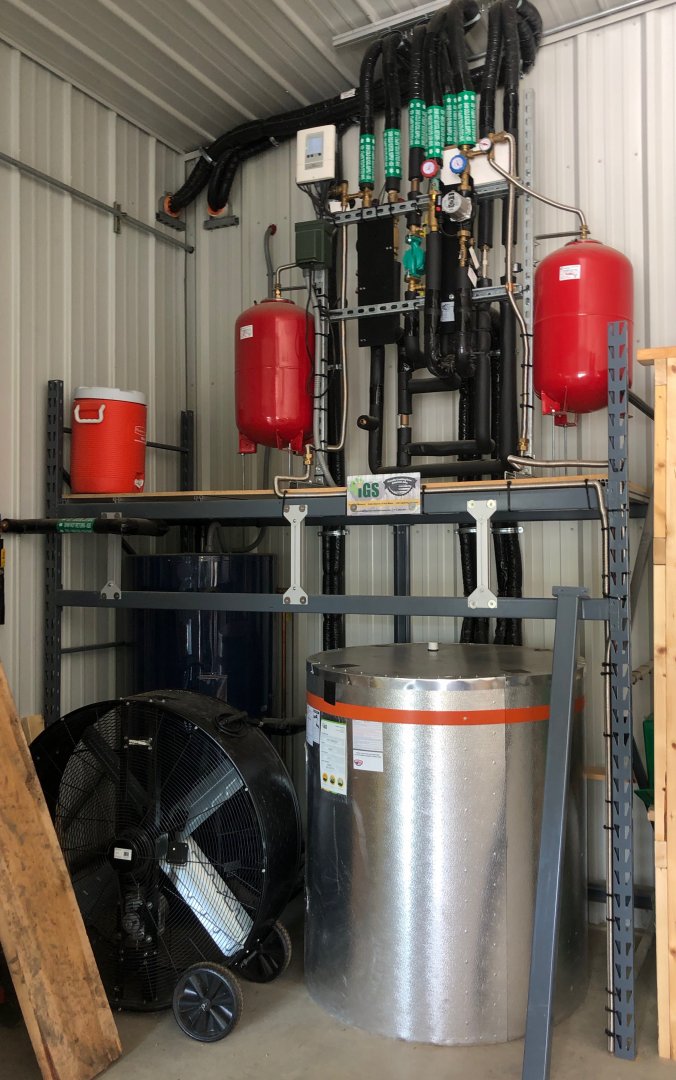 Solar heaters on the roof of the eBarn.

One of the long term plans of the eGarden team is to install a biodiesel processor to convert waste vegetable oil from the fryers in the campus dining halls and convert it into useable fuel to run the vehicles used by the eGarden. The dining halls use a lot of fryer oil, as chicken fingers are a very popular menu item. The best sustainability initiatives take the waste from something else, and turn it into something useful. Currently, the school pays another company to ship the used oil away. Using this waste to power vehicles on campus would be a more sustainable option. The truck that is used to collect compost around campus can use diesel produced by this device as well as many other vehicles in Geneseo's fleet. The eGarden is also working to acquire a tractor that would run on diesel to help move compost around, as well as other projects that need a little more heavy lifting. The generator we have processes 50 gallons of vegetable oil at a time, and can produce a gallon of fuel per gallon of vegetable oil. The barrier to this project is in having a fire suppression system in case of an emergency, and having the funds to make the necessary changes. 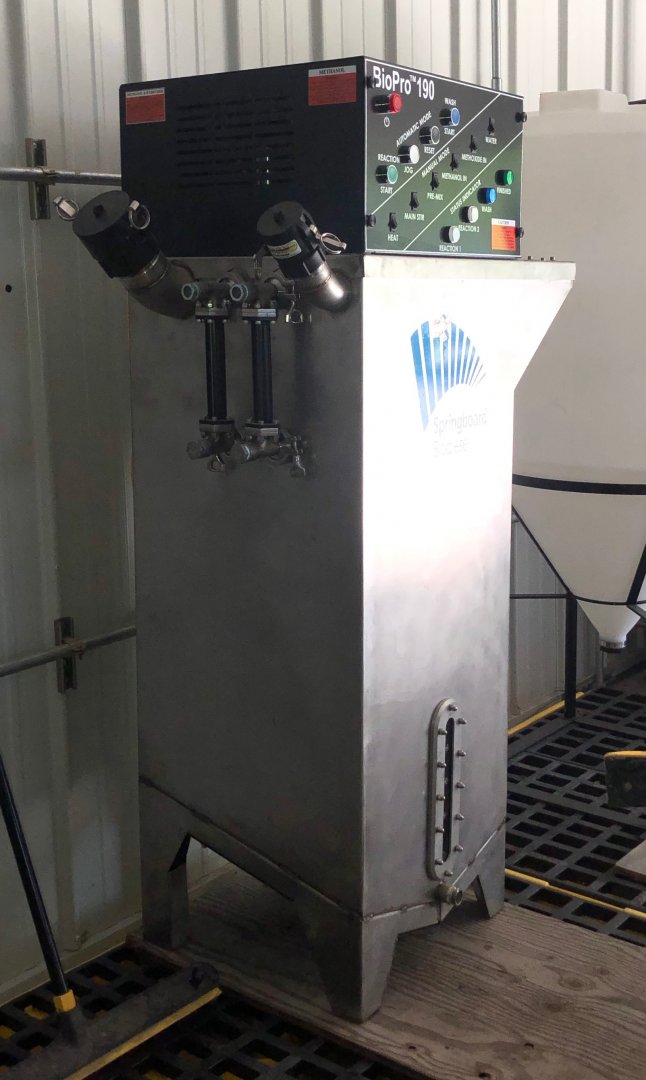 Algae Biodiesel : Using algae to grow our own biofuel

eCart : Learning about electric motors and energy use with an electric golf cart

Solar Collectors and Thermal Capacitor : Using the sun to heat a greenhouse

The Office of Sustainability in cooperation with Campus Auxiliary Services, have been working on bringing organic food grown on campus into the dining halls since 2017. A series of raised beds were built in the eGarden that use compost produced by the campus and don't use any pesticides. The foods produced there are used by Campus Auxiliary Services in the dining halls in true farm to table fashion. In the spring of 2018 we doubled the amount of raised beds to up the amount of veggies that can be produced for the school. In addition to use in the dining halls, extra veggies are sold by the interns at the Geneseo Farmer's Market that takes place on Thursdays during the summer from 3-6:30 pm. Check them out on facebook

The Office of Sustainability hires the students that work on the composting program and take care of the plants in the eGarden. Follow them on instagram to keep track of what the sustainability interns are up to.

Quite an array of edible foods are produced in the eGarden, from bunches of garlic to peppers, tomatoes, onions, zucchini, squash, watermelon, strawberries and more! The sustainability interns tend the vegetables in the eGarden. They are grown from seed, first started in the eGarden barn and then transferred to the outside beds once they are mature. 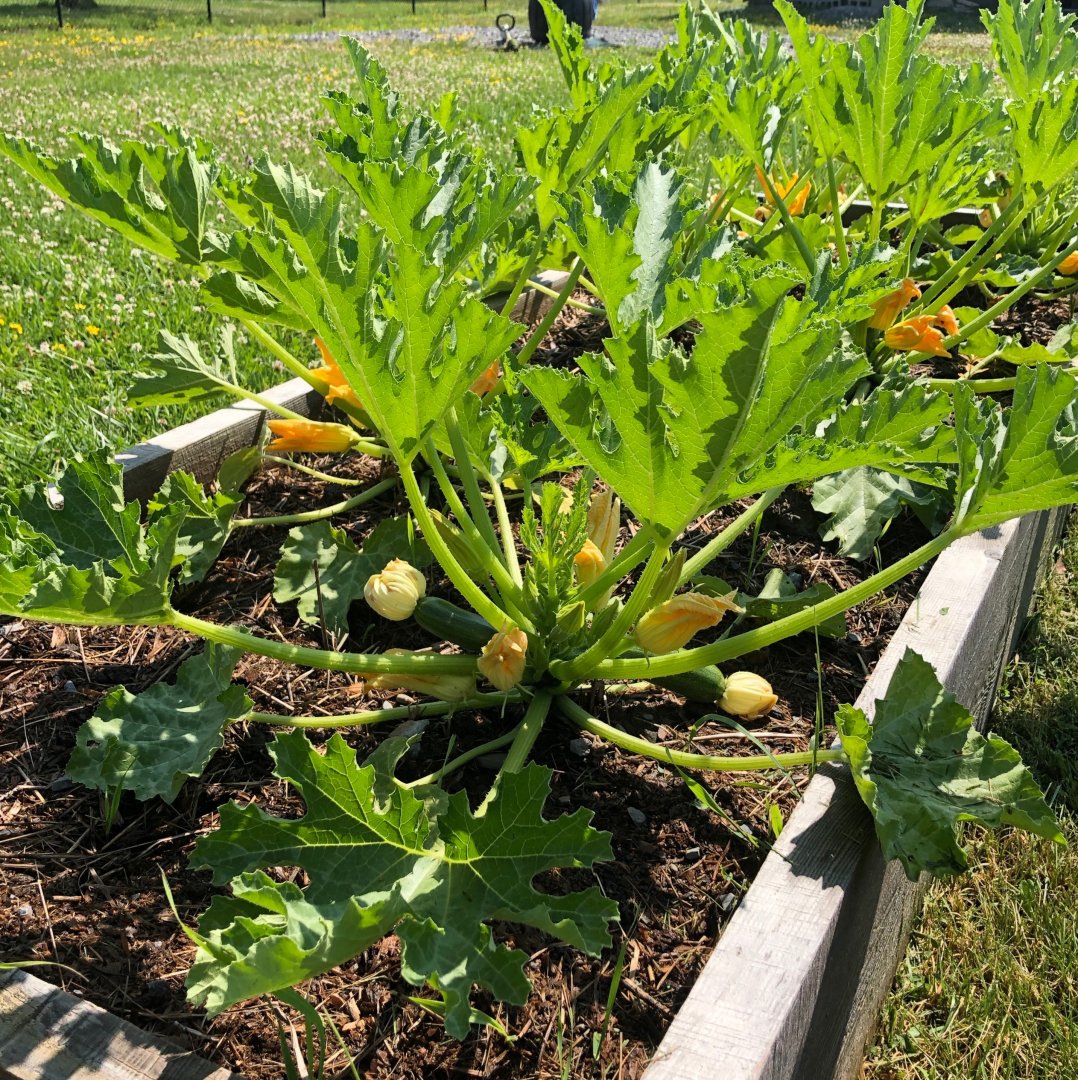 Zucchini growing in the eGarden. 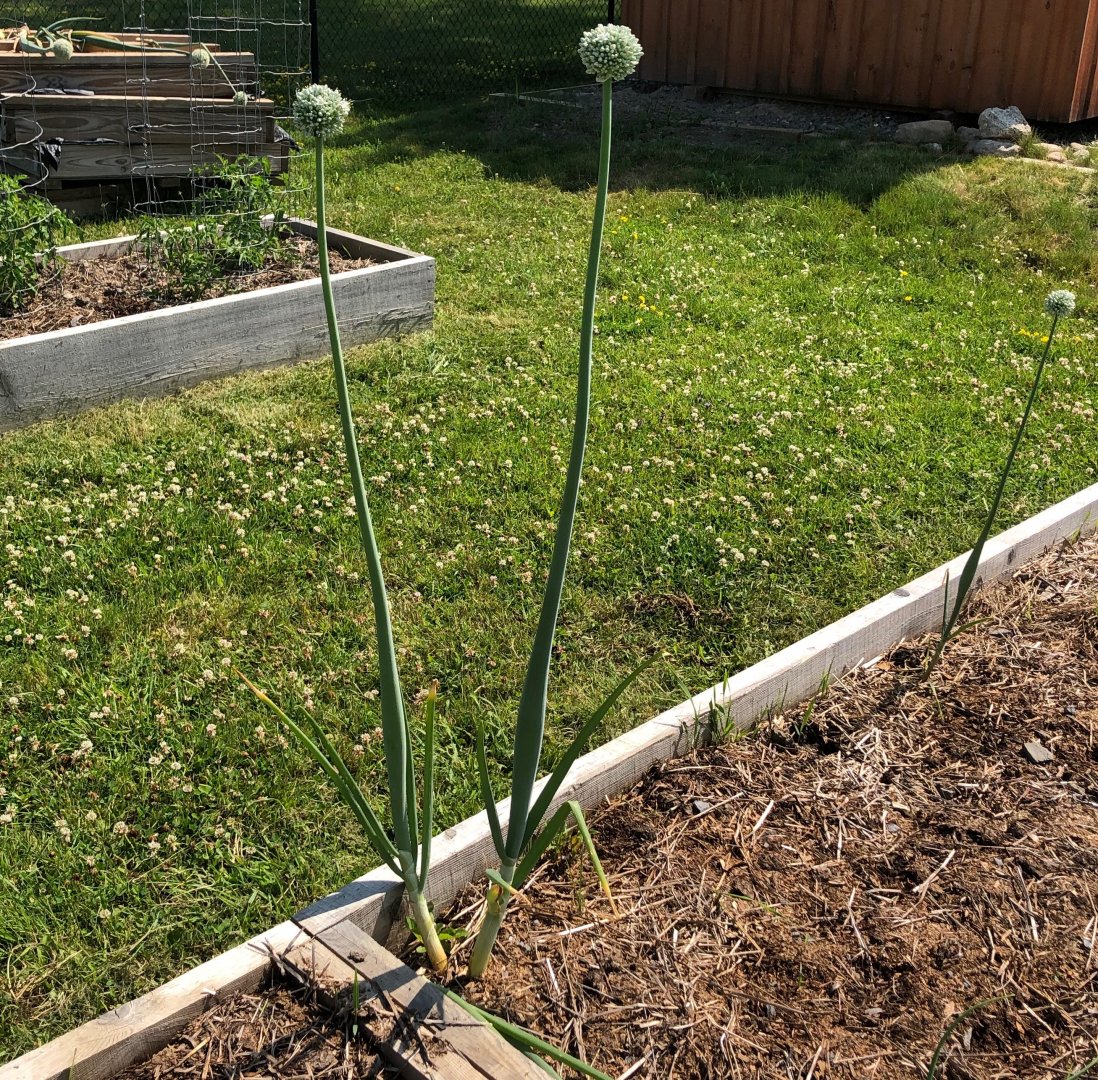 Onions growing in the eGarden.

The operation has expanded so that composting is now available in academic buildings on campus, such as in department offices and in administrative buildings. It is also available to off-campus students who would like to participate, although they are responsible for delivering their compost to the pile. Otherwise, the sustainability interns collect all the compost on campus and deliver it to the windrow style compost system which is located behind the eGarden. They use the eGarden to clean out the compost buckets before returning them to their original location. 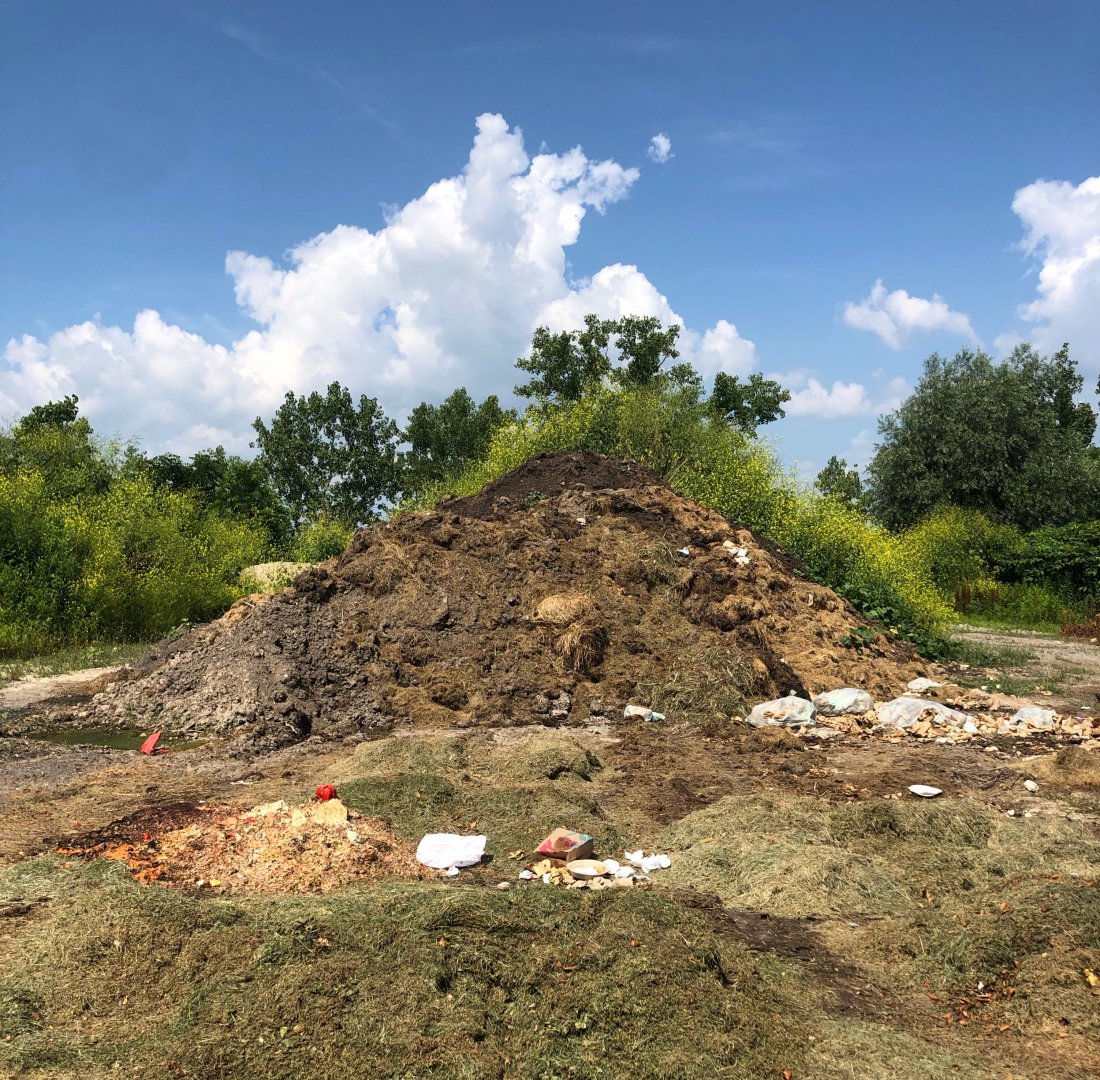 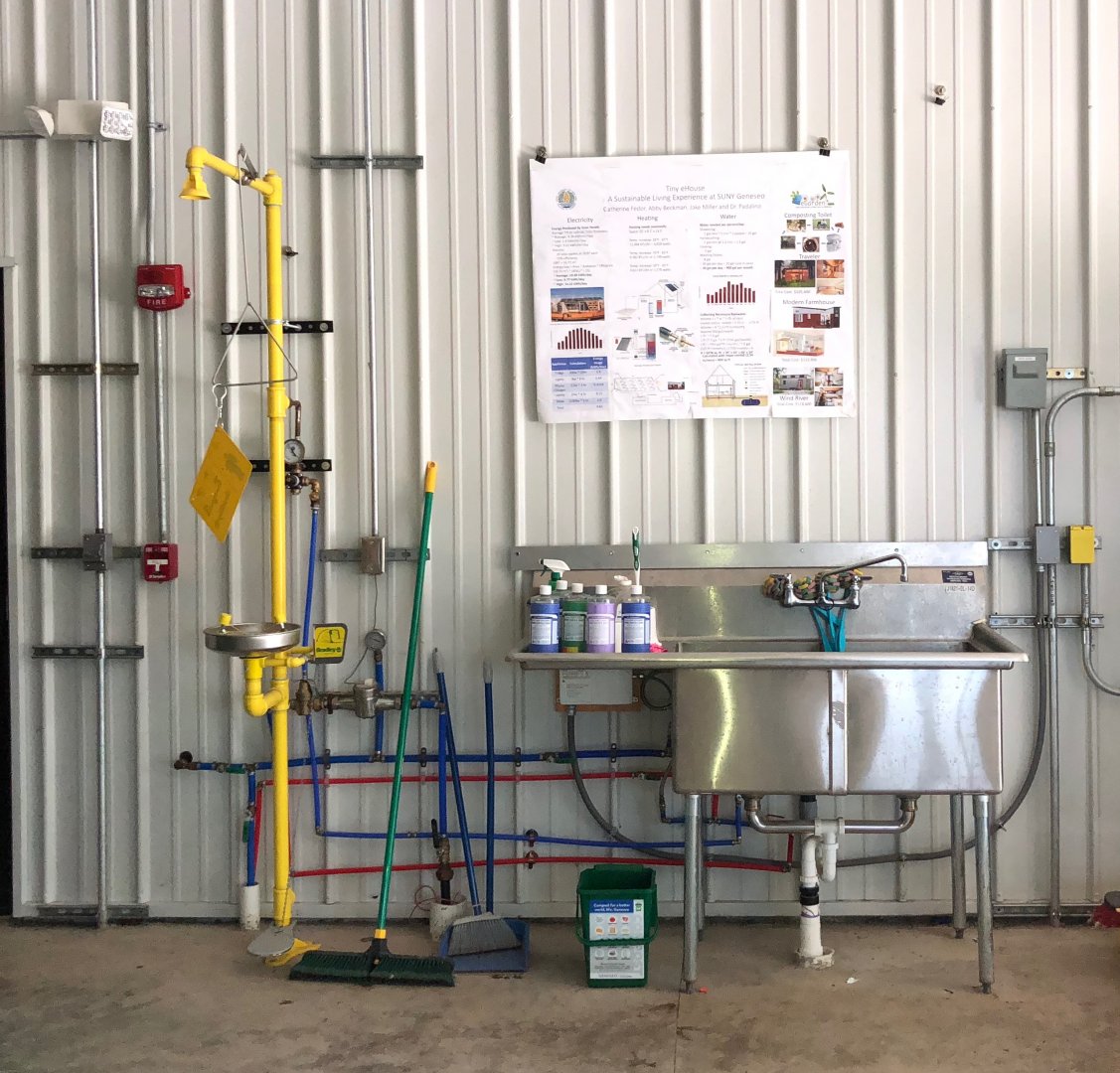 The cleaning sink in the eBarn.